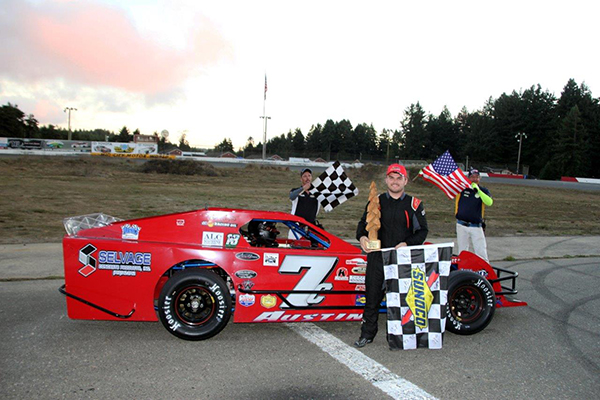 (September 27, 2020 from North State PR) – In his first outing in a modified this season, Cameron Austin of Santa Rosa inherited the front row position when Charlie Collins scratched from the race with engine problems. Austin took the lead away from pole setter Randy Houston of Medford, Oregon at the drop of the green flag, and led all 60 laps of the McMurray and Son’s Roofing feature event in race number three of the North State Modified Series (NSMS), presented by Protect the Harvest, at Redwood Acres Raceway Saturday evening. Austin collected $2000 for his efforts as well as $200 bonus money from sponsor Dave McMurray.

The Lucas Oil Dash for Cash saw Jeremy Nowlin the $100 winner, but Nowlin’s luck did not continue in the main event as on lap two his car slapped into the turn four wall resulting in it limping to the pits.

Four rounds later while running fourth behind Austin, Houston and Knight, Winters’ car popped out of gear, slowed on the back stretch and came to a stop high in turn four, bringing out the only yellow flag in the race.

When racing resumed Austin forged ahead again with Knight driving under Houston for second. Elliot and Darrin Sullivan had a 3-lap side-by-side battle for fourth with Sullivan finally making the outside pass. Sullivan next set his sights on Houston, and on lap14 nose-to-tail contact between the two saw Houston drift high allowing Sullivan to take over third position.

Tellstrom was running fifth behind Elliott, and though he made several inside run attempts to pass, Elliott kept him in his rearview mirror. The lapping process began on lap 19 with Austin gracefully picking off the slower cars. Steve Taylor retired his car to the pits on lap 28, and Sal Lopez was black-flagged on lap 32 for excessive smoke.

With only five laps go to Austin’s tires wore out allowing Knight to close the gap. Knight tried to sneak under Austin on the white flag lap, but time ran out and Austin raced hard to claim his first modified race in 2020. Knight finished second followed by Darrin Sullivan, Houston, Elliott and Tellstrom. Winters bounced back to a seventh-place finish just ahead of Dustin DeRosier, Simi Tour, Cody Braund and Mike Sullivan. Rounding out the field were Keith Bloom, Donovan Cox, Chris Salmina, Robert Schmidt, Lopez, Taylor and Nowlin.

A second dash for cash was sponsored by the new promoters of Redwood Acres Raceway with Bloom the $100 winner. The main event purse was increased to all the drivers courtesy of the Great American Seed Company. McMurray and Sons Roofing also gave every driver in attendance a $200 bonus. The $2500 Lucas Oil Tow Money was shared by the top 15 points contenders.
Mike Sullivan won the Naake Suspension Hard Charger award for passing the most cars. The Scriber jugs went to Nowlin and Houston.

The next stop for the North State Modifieds will be at Shasta Speedway in Anderson, CA for the 5th annual “Lloyd Burton Against the Wind Modified Challenge” on October 2 and 3. It will be the richest event in the history of the series with $2000 going to the winner and $400 to start the race thanks to event sponsors Mort Houston, Simi Tour, GASCO, Protect the Harvest and Lucas Oil.