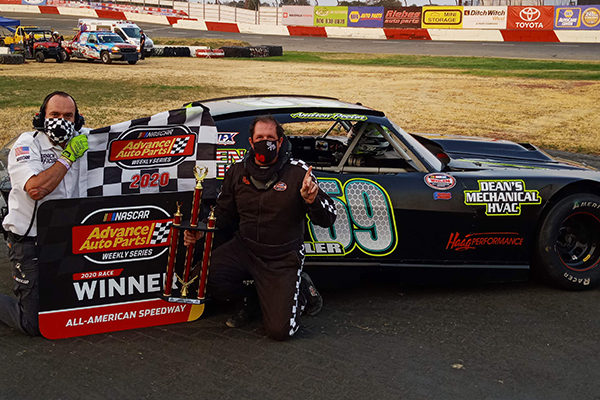 COVID-19 Protocols were enforced for this competitor-only event with live streaming coverage at www.AllAmericanSpeedway.TV A Video On Demand option is available after each race as well.

Schmidt ran outside of Lavallee until a caution flew on lap ten. Schmidt then used the restart to move into the lead on lap 14. Lavallee took the lead back on lap 15 however, with Schmidt drifting back to third on the outside. Peeler topped Lavallee on lap 19 by less than a foot before the caution flew. Peeler drove ahead for the victory with Schmidt advancing to second. Lavallee finished third but was disqualified for not reporting to post-race tech. Wilkins, Disomma, and Chris Paulson rounded out the top-five.

Jeremy Fritts of Roseville led from the pole in the second Super Stock feature. He faced pressure from both Wilkins and Peeler with Wilkins finally taking the top spot on lap eight. Schmidt found herself still relegated to seventh on lap nine. James Shelton spun on the backstretch while Peeler and Wilkins ran side-by-side. The race stayed green and Peeler used Shelton as a pick to lead lap ten.

Peeler then surrendered the lead back to Wilkins on lap 11. Peeler took control of the race on lap 13 with the lead.

Wilkins, Lavallee, and Schmidt engaged in a three-car battle for second that boiled over on lap 22 when they went three abreast into turn one. The caution flew as they spun with all three cars restarting at the tail of the field. Wilkins and Schmidt tangled again on the following restart, setting up a two-lap sprint to the finish. Peeler edged ahead of Disomma to score the sweep, with Lavallee and Wilkins coming back for third and fourth. Andrew Kemp rounded out the top-five.

Cole Moore extended his points lead in the NASCAR Late Models after a strong night that included his fourth win of the year in the division. Yorba Linda’s Dylan Garner went around the outside of Oklahoma’s Holley Hollan to lead lap one of the first twin main.

Moore qualified fourth and started fourth in the feature. Moore reeled in Garner to lead lap 18. Contact for third saw Matt Wendt spin off Reno’s Randy Hedrick for a caution on lap 21. Hedrick then advanced to second on the restart. Hollan and Garner battled for third before they had contact on lap 29, sending John Moore spinning and out of the race. Moore drove ahead from Hedrick to win the race with Garner, Hollan, and Wendt the top-five.

Michael Mitchell led the way in the second twin 35-lap feature while Wendt advanced up to second by lap three. Hedrick battled with Hollan for the third position before taking the spot on lap 13.

Wendt closed on Mitchell by lap 22 with Hedrick quickly approaching as well. Wendt applied the bumper exiting turn two, sliding past Mitchell to take the lead on lap 31. Hedrick followed him into second but could not get to Wendt at the finish. Matt Wendt claimed his first NASCAR Late Model win at Roseville over Hedrick, Mitchell, Cole Moore, and Hollan.

Roseville’s Ray Molina extended his F4 points lead with his second win of the season in their 25-lap contest. Nevada’s Rich Innis had the early lead while Molina charged from his sixth starting position up to second by the end of lap one. The duo went side-by-side after a mid-race restart with Molina taking over on lap 13. Lapped traffic kept Innis within arms-length but Molina persevered for the checkered flag. Innis, Jerry Nunes, fast-time qualifier Matthew Fuhs, and Steven Crook rounded out the top-five.

Jason Philpot of Sacramento continued a perfect Jaws Gear & Axle Limited Modified season with Saturday’s win. The initial front row failed to execute a clean start, moving Philpot to the outside pole alongside Lincoln’s Mike Gorham. Philpot moved past Gorham to lead the opening lap. Fast-time qualifier Josh Blackwood was up to second in time for the competition caution on lap 15. Philpot fended Blackwood off over the final 15 laps for the victory with Luke Kaper topping Gorham for third. Jon Yourd of Foresthill finished fifth.

For more information, visit www.AllAmericanSpeedway.com The 2020 season at All American Speedway could not be possible without Sinister Diesel, Jaws Gear & Axle, JM Environmental, and Riebes Auto Parts.