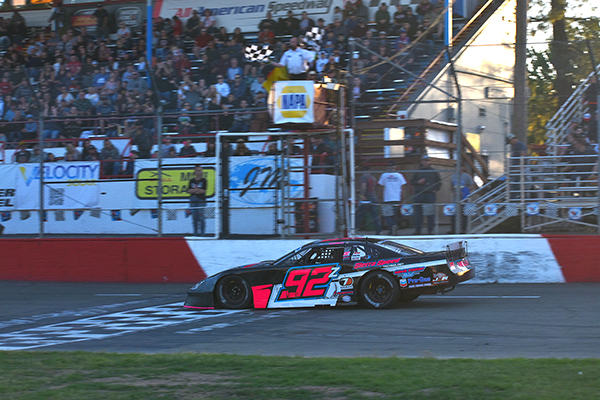 ROSEVILLE, Calif. (April 10, 2022) – Napa’s Dylan Zampa lifted his record in the 2022 NASCAR Berco Redwood Late Models to 3-0, sweeping the twin 35-lap features before a large crowd on Saturday night at All American Speedway powered by Roseville Toyota. Zampa was joined in Velocity Solar victory lane by six other winners in a big night @the Grounds. Photo by Don Thompson

Zampa’s second feature win was the most dynamic for the 18-year-old, as he overcame an eight-car invert to take over the lead by the conclusion of lap eight. He never relinquished the position over the final 27-laps for the win.

The first 35-lap feature lined up with Kylie Daniels of Fort Bragg and Loomis’ Michael Mitchell on the front row. Mitchell went around the outside to lead lap one. Mitchell, Zampa, and 2021 champion John Moore of Granite Bay made up the top-three in a tight formation by the 14th lap. Zampa worked his way to the inside of Mitchell on lap 16 on the backstretch, then cleared Mitchell to lead lap 18.

Zampa led Mitchell, Moore, Daniels, and 2021 runner-up in the standings Thomas Martin of Auburn at the finish.

Colorado Springs’ Holly Clark started on the pole for the second 35-lap race after the inversion. Daniels and Kenna Mitchell of Loomis both spun entering turn three to require a caution flag on lap two. When action resumed, former Jr. Late Model champion Aidan Daniels of Fort Bragg drove past Clark on the outside for the lead on lap five.

Zampa knifed into second, then made the pass for the top spot on lap eight. Clark drifted back to seventh on the high side by lap 11. Daniels and 2021 Jaws Gear & Axle Modified champion Eric Price collided battling for third in turn three to bring out caution just shy of halfway. A caution for debris on lap 22 did not deter Zampa as he topped Michael Mitchell, Moore, Aidan Daniels, and Martin as the top-five finishers.

Rick Andersen of North Highlands earned his first Jaws Gear & Axle Modified win in several years in a popular victory after 30-laps of competition. Colfax’s Ralph Bailey and Tyler Wentworth made up the front row. Wentworth used the outside to immediately grab the lead. Bailey fell into a battle with Spears Modifieds opening night winner Brandon White of Eureka for second. White ran down Wentworth by lap 10. Josh Blackwood and Sammy Nuno of Windsor collided in turn four for a caution on lap 12.

White tried a crossover into turn one on the restart, then dove inside Wentworth in turn three for the lead. Contact sent Wentworth spinning and relegated both cars to the rear of the field. Andersen restarted in the lead alongside Bailey. Andersen solidly had possession of the lead by lap 18, which he kept to the finish. Bailey finished second while White charged back to third. Jason Philpot of Sacramento and Cody Bailey rounded out the top-five.

Josh Whitfield continued his winning streak from the end of his 2021 championship-winning season in the Riebes Auto Parts Super Stocks, taking his second straight win of this season after a 30-lap feature. Once again the outside pole got the best of the start as Roseville’s Phil Wilkins took the lead. The leaders of Wilkins, White, and Whitfield darted three-wide through lapped traffic. Whitfield then used the outside to pass Wilkins for the lead on lap seven. A spin for Larry Thornhill of Galt on lap 25 did not deter Whitfield. Whitfield led the way on the final restart over White, Wilkins, Chris Lambert of Loomis, and Tim Walters of Dixon as the top-five finishers.

18 cars appeared for another large field of F4 cars competing in a 25-lap race. Vic Theberge brought out the first caution with a spin on lap five. A long battle between prior champions Matthew Fuhs and Ray Molina – both from Roseville – developed for the lead. Fuhs tried the inside line several times, but Molina led by a nose on multiple occasions. Fuhs used the slowing traffic from Todd Frantz of Sparks, Nevada to take the lead by on lap 13. Contact between Fuhs and the lapped car of Dan Cherry allowed Molina to drive back into the top spot on lap 18.

Timm Williams of Woodland lost a right rear tire and tagged the backstretch wall for a caution on lap 19. Fuhs used the restart to get the lead on the outside. Molina pushed to come back but went underneath the 16.5 second breakout rule. Fuhs won, scored ahead of Roseville’s Nathan Cleaver, Rocklin’s John Sproule, Newcastle’s Kameron Bair, and Theberge. Molina was scored at the end of the lead lap for the infraction.

Both divisions for the youngest drivers at the speedway staged exciting races on Saturday, with the Mini Cup feature seeing a back-and-forth duel between 11-year-old Lucas Burton of Stockton and 14-year-old Dayton Broyles of Roseville. Burton came out on top after numerous lead changes.

13-year-old Trey Daniels of Fort Bragg won his second career 30-lap Jr. Late Model feature. Fort Bragg’s Lane Anderson of Fort Bragg took the lead over Daniels on the opening lap. Holly Clark drove past Daniels, then clamped down on Anderson for the lead. The top-two ran as close as possible without making contact in a narrow battle. The battle boiled over on lap 14 in turn one, with the duo colliding and spinning to bring out the yellow flag.

Daniels inherited the lead and ran off with the checkered flag over the final half of the event. Clark drove back to finish second over Roseville’s Connor West, Auburn’s Colton Nelson, and Bella Thomsen of El Dorado Hills.

The Riebes Auto Parts Trailer Bash was a hard-hitting 15-lap affair. Dillon Peterson of Woodland started shotgun on the field but earned the $1,000 victory in his lime green Chevrolet HHR. Windsor’s Amy Jensen drove a Barbie-themed Windstar and won the $250 best looking car as voted by the fans. Mark Clarke won the Master of Disaster for $250 as well.