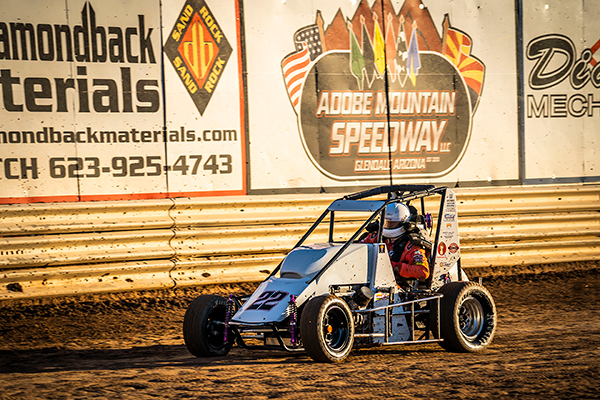 WATSONVILLE, CALIF. (April 7, 2022) – Round six of Western Midget Racing presented by Masters Design and Construction sees the stock production powered Midgets competing at Adobe Mountain Speedway in Glendale, Ariz. on Saturday night. The series is fresh off its first Northern California weekend, where 2021 champion Blake Bower of Brentwood became the first repeat winner of the season. Photo by Maxwell Patrick

Other winners this year include Fresno’s David Prickett of Fresno at Marysville and Adobe Mountain wins for Cory Brown of Peoria, Ariz. and Drake Edwards of Surprise, Ariz.

Teams who travel from more than 240 miles to compete at either event will be eligible for a part of the $400 in road warrior money offered at each round this season.

Pit gates open at 2pm with drivers meeting at 4pm and hot laps at 4:30pm General admission tickets are $10 while pit passes are $35.

Car construction details are available at www.WesternMidgetRacing.com or find the series on Facebook!