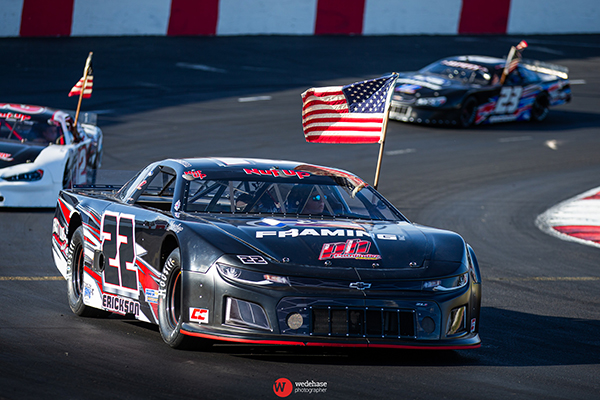 MADERA, CALIF. (June 23, 2021) – Madera Speedway will honor America and the memory of Rev. Ron Spencer will Saturday’s Red, White, and Blue Classic for the Nut Up Pro Late Models, 51FIFTY Jr. Late Models, and Mini Cups vs. Bandoleros. The MAVTV-televised night of action in central California serves as round five for the competitive championship battles at the one-third mile oval. Photo by Jason Wedehase

Ticket information can be found at: http://racemadera.com/ticket-info.html with online sales available through MyRacePass. Tickets can also be purchased at the gate. Race fans can also view the live streaming coverage on Short Track TV on YouTube beginning at 6:20pm Pacific.

The 2021 Nut Up Pro Late Model Series has turned into a battle of champions across the top-five in the points. 2019 series champion Austin Herzog has a lead of 15 points on the strength of a win, a second place finish, and a third place finish through the four races this year. Multi-time champion Matt Erickson has clawed into the picture as the winner of the Military Tribute Night as part of three-podium finishes as well. Herzog’s qualifying success has been the difference maker at this stage of the battle.

2019 Madera Late Model non-televised champion Tyler Herzog ranks third with a pair of top-five finishes. 2020 Stockton 99 Speedway champion Eric Nascimento had a thrilling win on April 3rd as the highlight of a season where he is fourth in the championship. 2018 Madera Late Model Jason Aguirre rounds out the top-five. Aguirre has four wins this season in the non-televised races but has yet to score a MAVTV win in his career. Vancouver, Wash.’s Jadan Walbridge is just one point behind Aguirre in sixth as well.

The Nut Up Pro Late Models will race for 80-laps on Saturday including a 50-lap opening segment and a 30-lap race to the finish.

Jacob Smith of Eagle, Idaho has driven car no.11 to an eleven-point lead in the 51FIFTY Jr. Late Model championship. Wimberly, Texas’ Barrett Polhemus is still angling for a win but has been a perfect four-for-four with top-five finishes throughout his rookie campaign. Ethan Nascimento rounds out the top-three in the championship – all three drivers running their first full-time seasons at Madera.

Brody Armtrout of Smartsville debuted a new car on May 22 and promptly charged to a convincing victory. The win also propelled Armtrout to fourth in the standings ahead of Colorado’s Brody Moore. Bakersfield’s Kercie Jung opened the season with a pair of fast-times in qualifying and sits in the sixth position. Opening night winner Kale McClenny – also of Bakersfield – is seventh in car no.07.

The 51FIFTY Jr. Late Models race for 70 fast and furious laps over a 40-lap opening segment and a 30-lap battle for the checkered flag.

Bakersfield’s Logan Chambers leads the Bandolero portion of the combined Mini Cup vs. Bandolero division with three victories. Joey Kennealy is the most recent winner in the division on May 22 with a clean sweep of qualifying, the heat race, and the main event. Caden Cordova of Bakersfield ranks third. The Mini Cup portion of the division is led by Kingsburg’s Sam Wedehase with three wins over Las Vegas’ Kellen Keller with one victory. been traded back-and-forth between Sam Wedehase of Kingsburg and Las Vegas’ Kellen Keller. Saturday’s combined main event will be a 20-lap race.

Action gets underway on Friday with practice from 5pm until 8:30pm with pit gates opening at 3pm. On Saturday, pit gates open at noon with practice at 2:30pm. Qualifying hits the track at 4:30pm followed by heat races. Short Track TV goes live at 6:20pm with all five features to follow.

Madera Racing on MAVTV airs Monday nights at 4:00pm Pacific. New 2021 episodes are being prepared for a summer release while the best of the 2020 season continues to air in rotation.