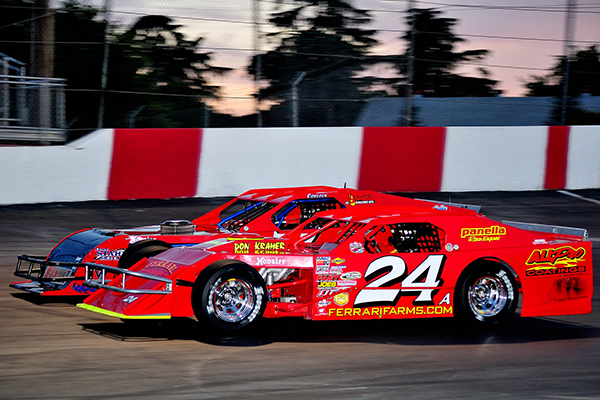 MADERA, CALIF. (May 6, 2021) – MAVTV cameras will turn their attention to open wheel action this Saturday night at Madera Speedway as the Mission Modifieds and North State Modifieds go head-to-head in a 60-lap contest on the one-third mile. Events will be open to spectators and also include Mini Stocks, Jr. Late Models, Hobby Stocks, Modified Super Toyotas, and Madera Late Models.

Tickets are on sale for the May 8th event with a link to purchase tickets online available at: http://www.racemadera.com/ticket-info.html

If you cannot make it to the track in person, the event will be broadcast live at ShortTrack TV for FREE at this link https://youtu.be/Sx94ad4GQvQ . The free broadcast is made possible with support from sponsors Nut Up, Mission Foods and 51 FIFTY LTM.

The Mission Modifieds began in 2020 as the 602 Modifieds but have expanded to also include both crate and open motor options this season, like the Nut Up Pro Late Models offer. The Modifieds will compete within the North State Modifieds event and again for round two on August 7. October 16 will be the Mission Modifieds finale during the MAVTV televised Turkey Triple Open.

602 crate engine cars will race for the Economy Heating & Air bonus of $750 for the highest finishing crate motor, $500 for the second highest, and $250 for the third highest. Economy is also paying an additional $100 in tow money for each of the top-ten in the North State points to make the journey south to Madera. Saturday’s 60-lap contest pays $1000 to win the winner along with a $100 to win Dash for Cash.

The Madera Late Models will stage a 40-lap event with Jason Aguirre leading the way on the strength of a pair of wins. Matt Erickson added to his illustrious win total at Madera with a triumph in March as well. Las Vegas’ Kyle Keller has a pair of podium finishes along with a fourth-place effort as well.

Bakersfield drivers Lloyd Wren and Mike Nicks have accounted for all three Madera Hobby Stock wins this season with the valley’s best drivers looking to overhaul them in Saturday night’s 30-lap feature. Former champion Manny Gonzales has finished in the top-three in all three races in hot pursuit of a victory.

The Modified Super Toyota complexion changed drastically in April when Shaun and Ryan Reynolds were unable to compete due to a medical emergency for Shaun Reynolds. Shaun is recovering while the MST action rolls on. Hailey Bugg won her first career main event on April 17 in a 30-lap affair and aims to duplicate the feat this weekend.

John Williams and Rick Lea have entertained in the Mini Stock division with a 20-lap event on tap. The Jr. Late Models for drivers ages 10-16 years old stage 30-lap exhibition races for training and seat time, with 14-year-old females Hailey Liles of Dinuba and Mini Cup champion Rebecca Dubie of Tracy among the regulars for the exhibitions.

Action gets underway on Friday with practice from 5pm until 8:00pm with pit gates opening at 3pm. On Saturday, pit gates open at 11:30am with practice at 1:30pm. Qualifying hits the track at 3:25pm followed by heat races. Short Track TV goes live at 5:40pm with the Modified dash and all features to follow.