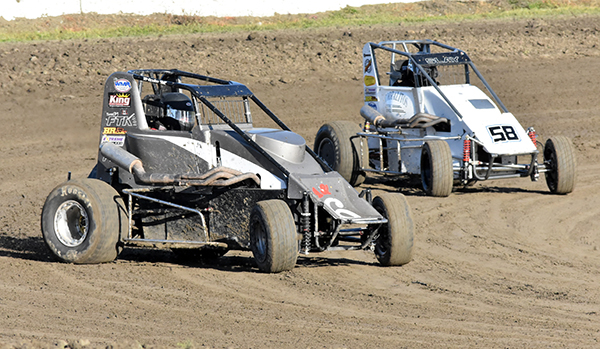 WATSONVILLE, CALIF. (May 6, 2021) – Western Midget Racing presented by Masters Design and Construction makes a return to Glendale, Ariz. on Saturday night at Adobe Mountain Speedway, kicking off a busy stretch of races for the production-powered Midgets. Drivers will compete in the fifth championship race of the season, followed by a double header weekend on May 14 at Ocean Speedway and May 15 at Petaluma Speedway in Northern California. Photo by Joe Shivak

A driver’s best 12 finishes count towards the championship. Megan Moorhead of Santa Paula leads the championship thanks to a combination of her perfect attendance, two fifth place finishes, and a strong runner-up finish last month at Adobe. The mother of two will aim for her first series win on Mother’s Day weekend in the #17 Spike/EcoTec.

David Prickett of Fresno enters the weekend with 13 career series victories and will carry some flavor of the islands on his Neverlift Motorsports team this weekend. Hawaiian drivers Doug Fitch and Rocky Silva will join Prickett for a trip to the Copper State on the 1/5th mile Adobe Mountain Speedway.

Arizona will be well-represented in the field with Peoria’s Cory Brown checking in from fifth in the standings with a victory in the season-opener at Adobe. Other Arizona drivers preparing cars for the event include Kyle Huttenhow, Kyle Klein, and Tyler Rodriguez. Hawaiian Kala Keliinoi is also slated to be competing this weekend.

Next Friday and Saturday is expected to attract a deluge of new entries to the WMR fold, with both Ocean Speedway and Petaluma Speedway broadcast live on FloRacing.com A full list of expected drivers will be released next week, with as many as 22 teams attempting to compete over the two-night Northern California stop.