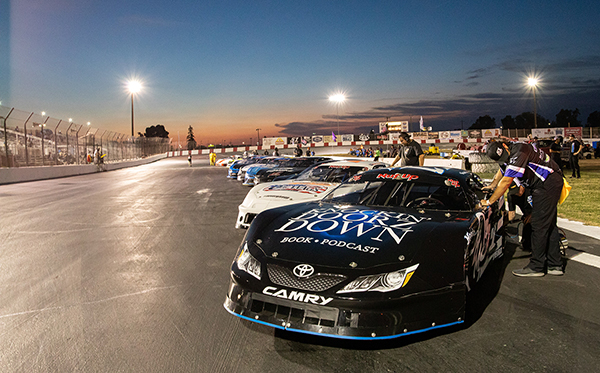 MADERA, CALIF. (August 18, 2021) – The drivers of the MAVTV-televised Nut Up Pro Late Models and 51FIFTY Jr. Late Models will have more to race for than just the coveted Madera Speedway championships this weekend, as the speedway will raise money for Valley Children’s Hospital. $5.00 of every ticket will be donated to the hospital along with a donation match from sponsor Nut Up. In the 80-lap Pro Late Model feature, each driver will be paired with a race fan. One lucky fan will be in victory lane on MAVTV with their winning driver and receive a gift basket from Nut Up. Photo by Joshua Rodriguez

Ticket information can be found at: http://racemadera.com/ticket-info.html with online sales available through MyRacePass. Tickets can also be purchased at the gate. Race fans can also view the live streaming coverage on Short Track TV on YouTube beginning at 6:10pm Pacific.

Vancouver, Washington’s Jadan Walbridge is on a sensational ride in the Nut Up Pro Late Model Series. The 16-year-old Jr. Late Model graduate earned a runner-up finish on May 22, fast-time on June 26, then closed the deal with fast-time and a dominating first-victory on July 31. The performances have boosted Walbridge into the series points lead heading into Saturday’s round seven.

Walbridge has a nine-point lead over multi-time champion Matt Erickson. The pair of blue Late Models are chased by the Herzog cousins of Tyler and Austin Herzog, each with one triumph this season. Madera overall points leader Jason Aguirre ranks fifth in the Nut Up Series while Madera club Late Model points leader Kyle Keller of Las Vegas rounds out a tightly bunched top-six. Saturday’s 80-lap contest includes a 50-lap opening segment, a break for MAVTV interviews and adjustments, then a 30-lap race to the checkered flag.

Eagle, Idaho’s Jacob Smith continues to be the points leader in the 51FIFTY Jr. Late Model Series for drivers ages 10-16 years old but a Northern California driver is closing in. Smartsville’s Brody Armtrout has won three consecutive features, with the last two races seeing Armtrout leading at the lap-40 break as well. Smith has not finished lower than third over this three-race stretch, however, and has back-to-back fast-times in qualifying as well.

The parity has seen Armtrout gain just six-points on Smith in the championship despite the string of wins. Texan Barrett Polhemus has finished in the top-five in five of his six starts in his rookie season to rank third, followed by Ethan Nascimento and 2020 Bandolero champion Jeffrey Erickson of Phoenix, Ariz. Each 51FIFTY Jr. Late Model Series contest is a 70-lap affair broken into segments of 40-laps and 30-laps with a Mission Foods break in between.

Action gets underway on Friday with practice from 5pm until 8:30pm with pit gates opening at 3pm. On Saturday, pit gates open at noon with practice at 2:30pm. Qualifying hits the track at 4:30 followed by heat races. Short Track TV goes live at 6:10pm with opening ceremonies and the three features to follow.

Madera Racing on MAVTV airs Monday nights at 4:00pm Pacific. The third round of the Nut Up Pro Late Models airs on Monday August 30th!