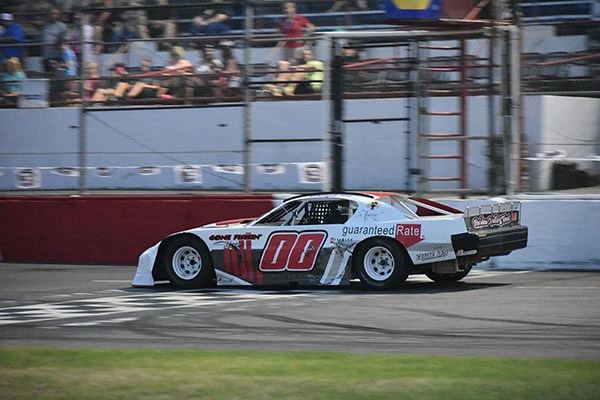 The second 25-lap feature again started with Disomma assuming the lead during the opening battle. Peeler led lap three with Whitfield in pursuit. Whitfield jumped outside of Peeler on lap six into turn one. The pair ran side-by-side until Whitfield cleared Peeler for the lead exiting turn four on lap eight.

Peeler suffered a broken fitting on his power steering that led to a large fire in turn four. The red flag flew on lap 10 and Peeler emerged uninjured. Whitfield topped Disomma, with Thomas putting on a late charge to finish third. Jerry Fritts of Roseville and Lambert rounded out the top-five. Whitfield won a total of $250 in bonus cash from Guaranteed Rate and Riebes Auto Parts, pushing his winnings to $550 for the night.

Eric Price won his sixth Jaws Gear & Axle Modified feature by topping the field for the 30-lap event. Foresthill’s Jon Yourd went wide into turn one at the start, allowing Price to go underneath to take the lead on lap one. 2020 champion Jason Philpot of Sacramento passed Colfax’s Ralph Bailey on the outside to take second on lap 13. Bailey then tangled with Corey Englehardt of Looms in turns one and two, with Bailey spinning for a caution on lap 17. Price was undeterred, driving his best lap times of the evening to accumulate a 1.657 second advantage over Philpot at the finish. Rocklin’s Tyler Wentworth held off Bailey for fourth with Englehardt settling for fifth.

15-year-old Kenna Mitchell of Loomis won her third Jr. Late Model feature of the year by taking Saturday’s 40-lap Jr. Late Model Challenge. She led the first 20-laps before a competition caution on lap 20. Fort Bragg’s Lane Anderson earned the fast-time and started alongside of Mitchell on the restart but was unable to make a pass. A pair of cautions flew for spins involving Salt Lake City, Utah’s Kylie Ith on opposite ends of the race track. Mitchell picked the inside of Anderson for both restarts and never waivered on the way to a popular victory. Anderson and Ith rounded out the top-three while Mini Cup/Bando points leader Colton Nelson of Auburn ran fourth in his debut ahead of 2020 Mini Cup champion Bella Thomsen.

Lincoln’s Brandon Frantz scored his first F4 main event win in the 25-lap race. Nevada’s Stephen Crook led the opening lap with Frantz using the outside line to advance to second. Frantz then went outside of Crook for the lead, then crossed over to the inside on the backstretch to lead lap four. Matthew Fuhs passed points leader Ray Molina of Roseville for third on lap eight.

Fuhs then challenged Crook for second, with slight contact between the two in turn three sending Crook spinning for a caution on lap 15. Crook restarted at the rear while Fuhs battled with Frantz for the win. Frantz earned the victory while Molina passed Fuhs for second. Dennis Crook and Stephen Crook rounded out the top-five finishers.

Auburn’s Colton Nelson won the 20-lap Mini Cup/Bando main event as he moved closer to a championship in the class. The UTV action on asphalt saw Anthony Fifer win the six-lap heat race with Sacramento’s Cody Vanderveer in pursuit. Vanderveer reversed fortunes in the main by dominating the 15-lap contest with Fifer finishing second. Colfax’s Steven Rearick won a race-long battle with Placerville’s Cory Deen for third as well with Mike Carciere rounding out the top-five.