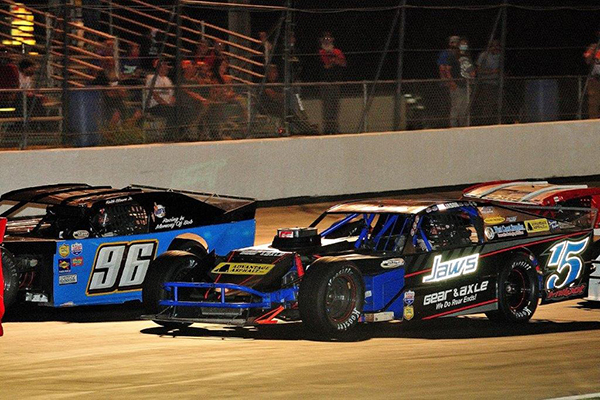 Advanced tickets are available online at www.AllAmericanSpeedway.com Tickets will be priced at $20.00 except children five and under who are free. Parking is controlled by @the Grounds and race fans must park at the main entrance lot off Junction Blvd. Grandstands open at 5pm with heat races starting at 5:15pm. Opening ceremonies will take place at 6pm with features to follow.

Economy Heating & Air will present the first-ever meeting between touring North State Modifieds and the NASCAR Division II Jaws Gear & Axle Modifieds. Each division will run in accordance with their respective rulebooks and tires but both will be eligible for the posted awards. The awards include $1,000 to the race winner, $150 to take the green flag, and Authority Heating & Air lap leader bonuses of $250 on both lap five and lap 55.

Alan Bridgman is two-for-two in the $1,000 to Riebes Auto Parts Trailer Bashes in 2021. He narrowly escaped defeat in round two, seeing his trailer flipped on its side for the duration of a lap before it righted itself and he was able to motor away for victory. The winning driver must both finish first and have their tow rig of choice still attached. This weekend’s round will also allow for boats dragged behind cars without a trailer, which still must survive all 15-laps to be eligible for the win.

Full entry form and rules are available on the speedway website.

Auburn’s Thomas Martin leads the NASCAR Berco Redwood Late Models by two points over Granite Bay’s John Moore with Saturday’s twin-35 bill ahead of them. Moore has won four of the seven rounds so far. Fort Bragg’s Aidan Daniels is 24-points out of the lead in third followed by Loomis’ Michael Mitchell and Roseville’s Lance Halm.

The Riebes Auto Parts Super Stocks have a 30-lap contest this weekend with 2020 champion Andrew Peeler leading Roseville’s Josh Whitfield by just five points. Roseville’s Roy Smith is only seven points out of the lead in third followed by Dixon’s Tim Walters and Roseville’s Jeremy Fritts. Ray Molina of Roseville has extended his F4 lead to 23 points over Roseville’s Matthew Fuhs. Dennis Crook of Fernley, NV, Brandon Frantz of Lincoln, and Citrus Heights’ Dan Cherry round out the top-five with a 25-lap race scheduled.

Additional information on fan attendance is available at www.AllAmericanSpeedway.com Competitors will participate in practice activities on Friday before racing on Saturday. Pit gates open Saturday at 11am with practices beginning at 12:30pm. Qualifying takes place at 3:15pm before grandstands open at 5pm. Heat races for Super Stocks and F4s are scheduled for 5:15pm, followed by the Lucas Oil Dash for the North State Modifieds. Opening ceremonies will take place at 6pm with features to follow. The Riebes Auto Parts Trailer Bash closes the show.

Races will also be available on Pay-Per-View at www.AllAmericanSpeedway.TV