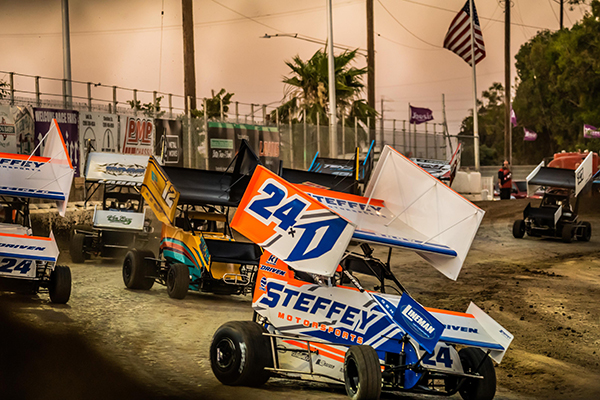 STOCKTON, CALIFORNIA (July 7, 2021) – Championship Micro Sprint racing continues at Stockton’s Delta Speedway presented by Financial Center Credit Union on Saturday night. Drivers are battling on the dirt for $1000 championships in Super 600, Non-Wing, Restricted, and Jr. Sprints. Action will start one hour later than usual with the driver’s meeting at 5:30pm. Hot laps and qualifying will follow. Photo by Maxwell Patrick

Triple digit temperatures and triple digit car counts made for a successful Summer Sizzler during the last weekend of June. The Super 600 championship tightened tremendously with Stockton’s Nikko Panella enjoying just a one-point advantage over Livermore’s Travis Labat. Medford, Oregon’s Austin Torgerson is just two points out of the lead while 2019 and 2020 champion Caden Sarale of Stockton is 15 markers in arrears. Torgerson is the only driver in the top-four without a previous Super 600 title at the 1/7th mile dirt oval. Caeden Steele rounds out the top-five. Sarale and Alex Panella, who ranks seventh in the championship, split the victories over the Summer Sizzler weekend. They will battle again this weekend for $500-to-win in a 30-lap contest.

Sarale’s Non-Wing win on Sunday during the Sizzler allowed him to extend his lead to 56-points over Cameron Paul of Springville. Torgerson is in the Non-Wing championship fight as well from the third position followed by 2020 Restricted track champion Brandon Riveira who is having a brilliant rookie season in fourth. 2018 champion Tj Smith of Fresno rounds out the top-five. Non-Wing also competes for 30-laps and $500-to-win.

Sacramento’s Austin Wood is winless in Restricted, but a consistent season has earned him a 20-point lead in the championship. Wood scored a pair of podium finishes over the Sizzler to maintain his points lead over Colton Key of Fresno. Visalia’s Jett Barnes earned a victory over the weekend to advance to third in the championship followed by Castro Valley’s Andrew Smith and former Jr. Sprint champion Isabel Barnes of Brentwood. 25-laps and a minimum of $300-to-win await the young drivers of Restricted this weekend.

Manteca’s Brody Rubio swept the Jr. Sprint proceedings during Summer Sizzler, boosting his championship campaign to four total wins and a 48-point lead. Oakdale’s Hayden Stepps, Millbrae’s Levi Osborne, Mavrick Pedroni of Jamestown, and Bakersfield’s Blayden Graham are the current top-five. Graham is tied with Vito Cancilla for the fifth spot, both 125-points out of the lead. Jr. Sprints race for 20-laps and a guaranteed $200 to the victor on Saturday.

Tickets are $10 for adults ages 13 and up, $5 for kids ages 6 to 12, seniors 55+, and military, and kids 5 and under are free! Pit Passes can also be pre-purchased by competitors for $20 or purchased at the gate. Pit gates open at noon with the driver’s meeting at 5:30 pm. Hot laps and qualifying will follow.