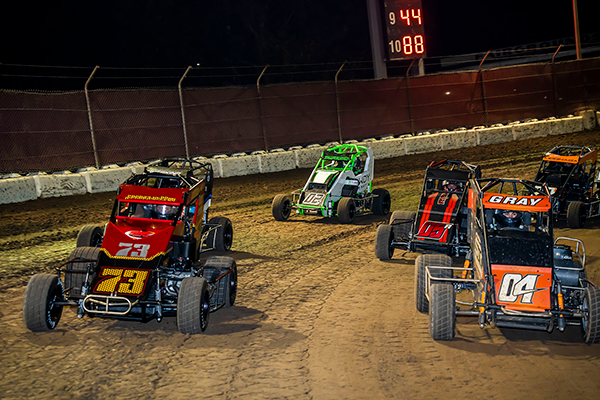 STOCKTON, CALIFORNIA (October 25, 2022) – Delta Speedway presented by Valley Strong Credit Union hosts the Turkey Bowl XXIII this Friday and Saturday in Stockton. The annual year-end tradition celebrates the Micro Sprint season on the 1/7th mile with outstanding purses and competition. $2,000 will be on the line in both the Super 600 and Non-Wing features on Saturday night while the youth of Restricted and Jr. Sprints duel for $1,000 each in their Saturday finales. Photo by Maxwell Patrick Imagery

All seats are general admission, with each night charged at $10 for adults, juniors ages 6-12, seniors, and military are $5, while kids 5 & under are FREE! Pit passes are $25 per day.  Fans who cannot attend can also see flag-to-flag coverage on The Cushion, the speedway’s Pay-Per-View partner this year.

Friday’s action includes heat races and qualifier races. Knock-out type races will also take place on Friday night in Restricted, Non-Wing, and Super 600 to finalize starting lineups for Saturday.  Pumpkin bowling will help finalize starting lineups for Juniors. Trick-or-treating and a costume contest will take place for fans and racers in front of the grandstands on Friday night as well.

2022 Super 600 and Non-Wing track champion Nikko Panella of Stockton aims to add to his outstanding season with a return trip to Turkey Bowl victory lane. Panella last won in 2016 in the Restricted division. His older brother Alex won the coveted Super 600 Winged victory in the 2020 edition. Stockton’s Caden Sarale has not only won eight track championships but has also scored five Turkey Bowl triumphs including the 2021 Super title.

Other winning families in the history of the event include two wins for Mitchel Moles and a win for Teagan Moles in 2021. Scott Mauldin won the 2008 Super 600 race while his 2022 Restricted championship-winning son Lucas Mauldin claimed the 2020 Jr. Sprint Turkey Bowl.

No driver has won both the Super 600 and Non-Wing Turkey Bowl in the same season but Nikko Panella certainly seems poised to challenge in both divisions after his championship sweep. The Turkey Bowl has also been dominated by Golden State drivers. Medford, Oregon brothers Austin and Ashton Torgerson finished on the podium in the championships this season in both Super 600 and Non-Wing and figure to contend for each win this weekend.

Briggs Davis will try to defend his 2022 Jr. Sprints track championship as well. The last two Jr. Sprint Turkey Bowls were claimed by that year’s champion.

Friday’s action kicks off with the pit gates opening at 1pm and the drivers meeting at 5:30pm Eight lap heat races for Jr. Sprints and ten lap heat races for the Restricted, Non-Wing, and Restricted divisions will be at approx. 7pm. Jr. Sprints will have 10 lap qualifier races while the other three divisions will compete in 12-lap qualifiers. Trick-or-Treating and Pumpkin bowling will follow before the Knock Out races.

Driver entry is $140 total across both days and includes car and driver.