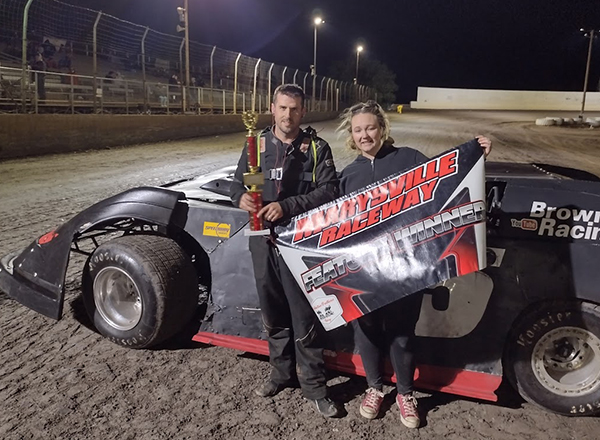 Brown and Vallejo’s Jake Dewsbury split the heat races for the Late Models before the 20-lap feature.

Brown, who won the series’ most recent race on October 8 at Antioch Speedway, led the way from the pole position. Buddy Kniss of Oakley fell backwards during the first half of the feature, drifting back to fifth.

Anthony Slaney of Martinez returned to the series and charged from his 12th starting position to third by lap 11. Slaney then challenged his teammate Dewsbury for second. They went side-by-side down the front stretch before colliding into turn one, sending Slaney spinning for a caution on lap 15.

Season opening winner Matt Micheli of Live Oak drove up into third on the restart while Dewsbury showed his nose inside Brown for the lead on the backstretch. Brown drove away to maintain the top spot. Micheli drove into second past Dewsbury, setting up an exciting battle for third.

Brown took the win by a comfortable advantage over Micheli. Dewsbury narrowly topped Olschowka at the stripe for third with Rod Oliver of Yuba City rounding out the top-five.

Shelby then survived the 20-lap feature with nearly a dozen cautions to win the Taxi Cab Open. Maurice Merrill of Willows led the way through a series of early restarts. Eighth starting Zach Lindgren of Oroville grabbed the lead on lap seven. 2022 champion Howard Law of Yuba City went back-and-forth with Merrill for second.

Law claimed second by lap 11 then challenged Lindgren. He took the lead on lap 14 in his car no. 14, seeming poised to win his seventh race of the season at MRP. That bid faltered with a mechanical issue under caution on lap 16.

Shelby, who started seventh, inherited the lead and never relinquished it for the win. Lindgren, Merrill, Jacob Bright, and Cheney rounded out the top-five.

Petaluma’s Mike Learn swept both the heat race and the 20-lap Pro / Street Stock feature. 2020 Taxi Cab Open winner Brent Lawrence of Grass Valley spun out in turn one at the start to require a complete restart. Coalinga’s Chris Smith was unable to answer the call after mechanical issues in the heat race.

Learn took a look on the inside of pole sitter Phil Marino of Chico in turn one, then took it three wide down the front stretch to lead lap one. Marino and Ray Trimble of Auburn battled side-by-side for second but Marino used the outside to hold the position.

Lawrence spun on lap eight to erase Learn’s 1.2 second lead over Marino. Lawrence then pounded the turn one wall on lap 12 to bring out another caution with eight to go. Mike Learn sailed to the win on the first anniversary of his father’s passing, followed by Marino and Trimble.

Jeff Olschowka used a borrowed car to win the Pure Stock feature. Ryan Peter of Rio Linda was credited with the heat one win while Jason Poppert of Rio Linda won the second heat race.

Peter led the way in the 20-lap feature. Olschowka drove up to second by lap four, then used a restart to seize second from Poppert. He took over the lead from Peter just a lap later then drove to a sizeable advantage at the finish. Peter finished second followed by Poppert in third. Merrill and Lindgren stepped up to Pure Stock and finished fourth and fifth.

Marysville Raceway wraps up its 2022 campaign with the Paul Hawes Memorial Sprint Spooktacular. The event features 360 Sprint Cars, Wingless Spec Sprints, Crate Sprints, and BCRA Lightning Sprints competing. Kids are encouraged to wear costumes for the “track or treat” at 5pm before the races begin.