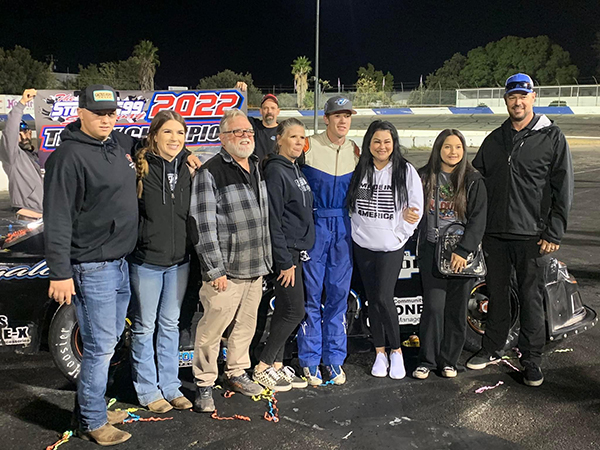 STOCKTON, CALIFORNIA (October 25, 2022) – Saturday October 22, 2022, saw the final night of racing at the historic New Stockton 99 Speedway in Stockton, California. Championship night at any racetrack in America is always bittersweet. Racers spend hours of work and effort to showcase skills and ability. The goal is to be crowned Champion on that final night, but only one driver walks away with that title and footnote in the history books. Photo by MegaPixel Marc

Saturday night in Stockton, Ca. was no different.

The Jr B4 class was first up on the track. A young 14-year-old young lady started on the pole position for this final race. She was in a borrowed car after being involved in accident earlier in the season. The green flag flew this young driver set a blistering pace and showed why she would be crowned the 2022 champion. Natalie Harper is the 2022 Jr B4 Champion and ended her season in dominating fashion by winning and leading every lap of the final main event.

A strong field of B4 racecars were next up. Joe Flowers who has been fast all year quickly jumped out to an early lead. This was a common occurrence this year as Flowers established himself as a front runner. As the laps clicked off Josh Cross in his green number 21 quickly worked thru traffic and found himself on Flowers’s bumper. After a few attempts Cross finally made a pass on the low side for the lead. At this point Cross quickly extended his lead and won the race. Flowers finished second and clinched the 2022 Season Championship. Congratulations Joe Flowers 2022 B4 Track Champion.

The Baker Roofing Bomber class hit the track next. This class is always exciting and a crowd favorite. It’s made of old Camaros and GM Metric style cars. The Green flag flew, and point leader Donny Darter quickly worked to the front and had to work a bit to make the lead. Once in the lead Darter ran a smooth line and topped the field once again for the win. This main event win sealed Darter’s 2022 track championship. Congratulations Donny Darter 2022 Baker Roofing Bomber Track Champion.

To end the night the Lovotti Inc., Stockton Late Models hit the track. This main event was scheduled for 100 laps. Number three in points Gary Shafer Jr., and number one in points JoJo Stearns lined up on the front row. The green flag flew and Shafer jumped to the early lead and Ty Carlson jumped to second.

After the first couple of laps Stearns took over second and Carlson slid back to third. The hard racing between Stearns and Carlson allowed Shafer to pull out to a comfortable lead and Stearns was comfortably in second. Soon Larry Tankersley and Chuck Dozier caught up to Carlson for third position.

The race from that point on for third was very tight as these three drivers were in slug fest for third.

Around the lap 60 mark we saw the first and only caution flag all night as Aaron Shankle’s car seemed to lose power. After a brief stop in the infield Shankle returned to the track. The Green flag flew once again and Shafer returned to the lead setting a blistering pace that saw him get almost a straight away ahead.

Stearns settled into second as the battle for third remained heavily contested. Tankersley finally found his way around Carlson. The final Checkered flag of the 2022 season waved for Gary Shafer Jr. Shafer won the final race, but JoJo Stearns won the Championship.

Congratulations to all the drivers on a great season. Thank you to all the fans who came and supported the track. Thank you, Tony Noceti and the entire Noceti Group, for making a great facility to come race. We look forward to seeing everyone in 2023. And don’t forget racing is not done at The Stockton Dirt Track. See you’ll November 5th for the Triple Crown featuring NARC King of the West, Sprint Car Challenge Tour, & the Hunt Magnetos Wingless Tour. Details at www.StocktonDirtTrack.com.