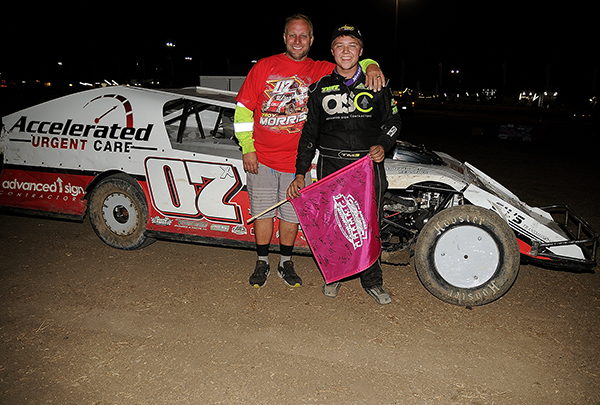 Morris drove around the outside of 2020 and 2021 Ocean champion Cody Burke of Salinas at the start of the feature for the lead. Tim Balding of Prunedale stopped in turn four for a caution on lap four. Morris encountered significant lapped traffic on lap 14 with three-wide action in front of him. It boiled over into turn one with cars bouncing all over the track. Les Friend of Galt was hit hard by Prunedale’s Matthew Hagio, sending Hagio airborne into turn one. Both drivers were eliminated from the event. JC Elrod of San Martin also had contact and later dropped out from the race on lap 21.

Hogge broke free from the pack to drive from his fifth starting position into second. He attempted a crossover pass on Morris on multiple occasions in a tight battle. Morris never surrendered, earning the significant victory. Hogge settled for second followed by Burke. Former track champion Brian Cass of Livermore was the Hard Charger with a drive from 15th to fourth, followed by Hollister’s Andy Obertello in fifth. Friend won the Hard Luck award.

A late surge from Cale Kanke of Frazier Park earned him the 23-lap IMCA Sport Modified win after a marathon race with red flags and caution flags. Markus Frazier of Santa Maria led the opening lap before a caution for debris. Twain Harte’s Brent Curran went outside of him to lead lap three. Troy Morris, Jr. of Bakersfield spun in turn three and nearly collected Kanke, requiring an additional yellow.

The wildest moment of the night came on the restart when a three-wide collision on the front stretch swallowed up Yreka’s Ethan Killingsworth. He flipped wildly side over side in a tangle with Andrew Peckham of Grass Valley and suffered hard hits from Kenny Shrader of Pacheco and KC Keller of Tracy. Killingsworth was uninjured.

A four-car fender bender brought out a caution on the next attempt at a restart. Kanke challenged Mark Garner of Antioch for second, taking the position on the outside on lap 13. Coalinga’s Ryan Smith slowed on the top of turn two for a yellow on lap 17.

Kanke challenged Curran for the lead several times over the final six laps. Kanke drove around Curran on the outside to lead lap 21 and Andrew Pearce of Oakley followed him into second. Kanke, the 2021 Pettit Shootout winner, scored the win over Pearce, Curran, Brentwood’s Fred Ryland, and Bakersfield’s Tyler Blankenship. Blankenship’s drive from 15th also earned him the Hard Charger. Killingsworth was the Hard Luck driver of the race.

Three-time Ocean Speedway Hobby Stock champion Rob Gallaher returned to the speedway and to victory lane after a 23-lap feature. DJ Keldsen of Newman led the way from the pole position. Second-starting Taylor DeCarlo and third-starting Bobby Motts were each part of cautions in the early stages. John Tevis of Los Banos stopped in turn one for a caution on lap six. Gallaher seized the opportunity to drive outside of Keldsen for the lead on lap eight.

Kodie Dean of Chowchilla hit the backstretch wall while running in the top-five on lap eight, while a multi-car spin occurred simultaneously in turn one.

Gallaher drove to a 2.883 second victory over Keldsen, Ryan Hart of Dos Palos, Mark Cooper of Scotts Valley, and Clarence Holbrook of Galt. 2022 champion Joe Gallaher advanced from 18th to sixth for the Hard Charger. Dean was awarded the Hard Luck award.

Ocean Speedway hosts the second night of the 12th Pat and Jim Pettit Memorial Shootout on Saturday night including a 53-lap IMCA Modified feature. Grandstand gates open at 3:30pm with IMCA Modified qualifying to follow. Tickets are available at the gate. The event will also serve as kids night with kids under 12 admitted for free. Numerous games and activities will be offered to the young fans!