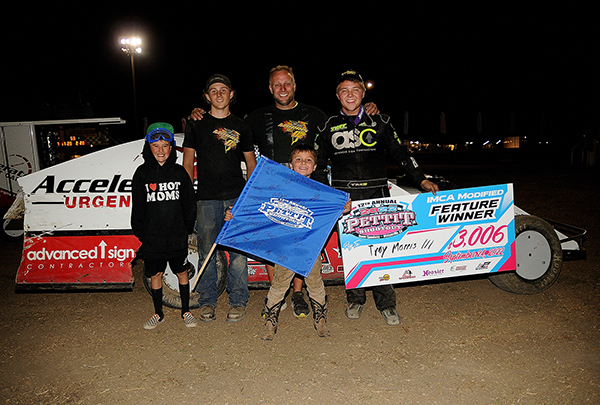 WATSONVILLE, CALIF. (September 25, 2022) – Bakersfield’s Troy Morris III completed the sweep of the 12th annual Pat and Jim Pettit Shootout at Ocean Speedway with a dominating performance on Saturday night, driving to a half-track advantage to claim the $3006 prize after the 53-lap feature. Morris’ healthy win came before a healthy crowd at the Santa Cruz County Fairgrounds in Watsonville, who also witnessed a IMCA Sport Modified thriller won by Fred Ryland of Brentwood along with San Jose’s Rob Gallaher completing a sweep of the Hobby Stock weekend. Photos by Top Dawg Photos

“I was telling myself to be conservative. I didn’t want that right rear to go away. But man this car was good. I could put it wherever I wanted to. (Dad) was giving me the signal but it couldn’t get any wider so that was a good sign,” Morris said.

Martinez’ Nick Decarlo started on the outside pole of the IMCA Modified feature and the 2022 Antioch Speedway champion engaged in a side-by-side battle with 2020 and 2021 Ocean champ Cody Burke of Salinas. Decarlo was clear of Burke on lap four with the lead.

The caution flew on that lap when track champions Jim Pettit II and Livermore’s Brian Cass collided in turn one. The ensuing incident collected Anthony Slaney of Martinez, James Lipke of Yreka, and Ramona’s Cole Dick. All drivers were able to continue in the event.

Decarlo drove into lapped traffic by lap 13 and Morris began to reel him in using the low line. They ran three-wide through turn one with a lapped car sandwiched between them. Morris edged forward on the backstretch and completed the pass for the top spot on lap 18.

Morris’ lead grew steadily despite ferocious traffic to contend with. The race went non-stop over the final 49 laps with Morris lapping all but the top-six finishers. He cruised across the finish line with a significant 6.087 second lead over Decarlo for the coveted victory. Burke finished third followed by 2021 Pettit Shootout winner Bobby Hogge IV. Trevor Fitz of Camarillo rounded out the top-five.

Troy Foulger drove from 19th to sixth to earn the Hard Charger award. Ray Lindeman missing out on the transfer in the first B-Main earned him the Hard Luck award.

Troy Morris III’s father Troy, Jr. led the way after starting on the outside pole position. Kanke used the outside line predominately to make passing maneuvers during Friday’s triumph and did the same on Saturday. He drove around the outside of Morris to lead lap 18. Bakersfield’s Nick Spainhoward was on a mission, advancing from 16th to third by lap 27.

Ryland looked inside of Kanke for the top position with six to go. They raced side-by-side until lap 31 when Ryland nosed forward with the lead. Kanke stayed up alongside of Ryland until the white flag, then tucked up behind him. Ryland led Kanke in a nose-to-tail formation across the finish line. Spainhoward finished third followed by Bakersfield’s Tyler Blankenship and Morris.

Grass Valley’s Andrew Peckham spun and was collected by his teammate Joe Antonetti in the final corner. It ended Peckham’s run from 18th to a possible top-six finish and awarded him the Hard Luck prize. Spainhoward was the Hard Charger.

Three-time Ocean Speedway champion Rob Gallaher won his first-career Saturday portion of the Pettit Shootout as he wrapped up a sweep of the weekend’s Hobby Stock competition.

Three-time defending Ocean champion Joe Gallaher was a part of a pair of minor incidents in turns one and two that put him behind the eight ball early in the race. Rob Gallaher led from the pole position while multiple cars within the top-ten suffered mechanical issues and flat tires. Bobby Motts of San Pablo stopped on lap 18 with a flat right rear tire in turn three, giving up a fourth-place position.

Gallaher drove ahead of the field on the final five laps for the win. Merced’s Chad Ragsdale and Newman’s DJ Keldsen both drove past Clarence Holbrook of Galt in the battling for second. 14th starting Mark Cooper of Scotts Valley finished fifth. Motts was awarded the Hard Luck while Sam Kennedy charged from 20th to seventh to win the Hard Charger.