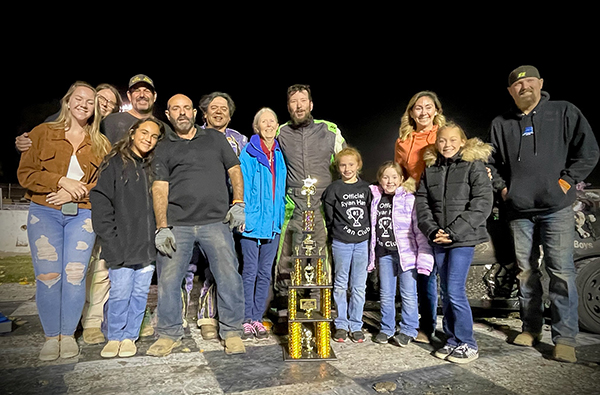 MADERA, CALIFORNIA (October 29, 2022) – Ryan Hart of Dos Palos successfully navigated a Madera Speedway filled with smashed pumpkins and other hazards to prevail in the 16th annual Pumpkin Smash Enduro on Saturday night. Hart led all 200-laps around the one-third mile speedway for his first ever Enduro victory. Hart was one of 25 drivers who tempted fates on the Halloween-themed event that will be televised later on MAVTV.

“(Leading all 200 laps) that’s got to be some kind of record,” Hart said. “I’m ecstatic. I’m always done well but always have had something happen. We had a super-fast car tonight and it still looks good. This is also the first Pumpkin Smash without my dad. I’m almost at a loss for words which doesn’t happen for me.”

Adam Baggett of Stockton won $250 for winning the 10-lap Barrel race, where drivers had to complete a U-Turn around a tractor tire on the front stretch each lap. Race fans trick or treated through the pits, then smashed pumpkins all over the front stretch before the race. Water and soap were added as well.

Hart started eighth in the Pumpkin Smash feature but charged into the lead on lap one. Perennial contender Mark Odgers of Mariposa suffered a short night with a hard crash that knocked him out of the race on lap 24.

When the red flag was lifted, Hart continued to lead the way. He skirmished with Connor Griffoul of Hollister, cutting down Hart’s left rear tire. Hart’s three lap advantage evaporated in the pits and he narrowly drove back onto the track in front of Baggett to keep the lead.

Baggett took over second from Gene Etheridge of Oakdale on lap 53 but then lost the position on lap 82 back to Etheridge. After the lap 100 break, Baggett took the second spot once more.

Rich Denman of Paso Robles ran down Etheridge over the entire second half, overhauling him for third on lap 166. Baggett was involved in a major multi-car melee in turn two on lap 175 that eventually relegated him to a long stop in the pits with right front damage. Denman inherited second and Etheridge inherited third in the process.

Hart claimed a nine-lap advantage at the end with Denman topping Etheridge for second. David McEwen won a long battle with Jamie Sitton to wrap up the fourth position. Baggett had to settle for sixth in the final rundown. Hart never relented despite his sizeable lead, running his best lap of the main on lap 159.

Madera Speedway will celebrate its 2022 season with its championship awards banquet on November 12th!