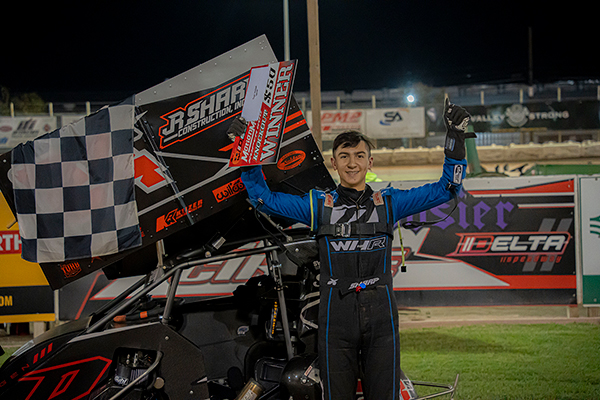 A challenging evening of heat races saw numerous flips and crashes including the Non-Wing competition where Ashton Torgerson and Rocklin’s Tucker Lacaze had a major flip in turn one followed by a flip for Mattix Salmon of Fresno in the same corner. Bakersfield’s Jett Yantis was part of a multi-car skirmish on the backstretch and Sharp suffered a big flip in turn three in Non-Wing as well. The incidents continued into the qualifiers where Ryan Carter flipped on the backstretch.

All the drivers involved were uninjured and when the dust settled, Brandon Carey of Ripon was the highest points earner in both the Super 600 and Non-Wing competition for the night. He pulled numbers for the starting lineups for the Knock Out races, drawing an eight for Super 600 and a 12 for Non-Wing to set their starting field size. 2021 Jr. Sprint champion Brody Rubio drew a 12 for the Restricted Knock Out as well. The top-four Jr. Sprints drivers participated in Pumpkin Bowling for their starting positions for Saturday’s feature with Maya Mauldin winning the pole position for her bowling efforts.

The most thrilling Knock Out came in the 16-lap Super 600 race. Carey led the opening lap with Stockton’s Caden Sarale looking inside. Sarale took over the top spot on lap two. 2022 champion Nikko Panella tried to follow Sarale up the inside of Carey. Carey and Panella crashed into turns one and two, ending both of their Super 600 Knock Out evenings.

Sarale led the field into the lap ten redraw for the top four to determine their starting positions for a six-lap shootout. Sarale drew the number three, however, while Austin Wood and Izaak Sharp drew the front row positions. Wood and Sharp engaged in a furious battle for the lead, with Sharp looking to Wood’s outside on several occasions. Sharp got the run he needed on the final corner to sweep past Wood in a .032 second thrilling victory. Sarale, Visalia’s Jett Barnes, and Carsen Perkins rounded out the top-five. Sharp will start on the pole for the $2,000 to win feature on Saturday.

Carey started on the pole for the 16-lap Non-Wing Knock Out but immediately slid backwards in turn one while racing alongside 2022 champion Nikko Panella. Devon Courtnier and Sarale tangled to bring out a caution flag on lap two, with Carey falling further backwards to tenth as the caution fell.

Carey charged forward into a battle for eighth but missed the transfer by one position after the lap five caution. With eight cars remaining, Panella battled with Jeffrey Pahule of Brentwood for the lead while 11th starting Austin Torgerson drove up to fourth. Torgerson advanced to the lead after the redraw. Torgerson never relinquished the lead for the win and the pole position in Saturday’s $2,000 to win feature. Panella, Pahule, Dalton Hill, and Cody Gray rounded out the top-five.

In the 16-lap Restricted Knock Out, Rubio leapt ahead of Andrew Smith of Castro Valley to lead lap one. Two drivers were eliminated after the lap five caution. On the restart, a ferocious battle developed outside of the top-four. The battle ended with Peyton Whitehouse of Pleasanton crashing hard on the exit of turn four. She was uninjured. The top-four drivers redrew their starting positions with Rubio preserving the pole for the final six laps. Hayden Stepps of Oakdale drew second but was passed by Smith. Andi Jones finished fourth followed by TK O’Brien of Manetca.

The 2022 Turkey Bowl XXIII concludes Saturday with the drivers meeting at 4:30pm and hot laps to follow. All lower mains and features will be run. All seats are general admission, with each night charged at $10 for adults, juniors ages 6-12, seniors, and military are $5, while kids 5 & under are FREE! Pit passes are $25 per day.  Fans who cannot attend can also see flag-to-flag coverage on The Cushion, the speedway’s Pay-Per-View partner this year.