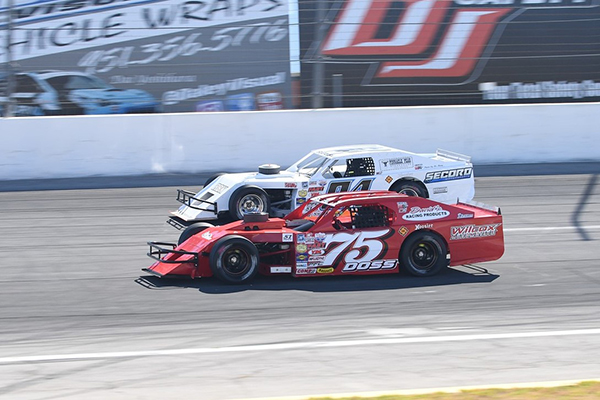 (December 17, 2020 from Kevin Peters) – In what has been one of the most hotly contested championship battles in SPEARS Modified Series presented by Lucas Oil (formerly Lucas Oil Modified Series) history, the fight will come down to the season finale at Kern County Raceway (CA) on December 19th. The “COMP Cams 60 presented by General Tire” will be the eighth and final event of a tumultuous 2020 season, which saw schedule changes, changes of venue and a shuffling of the rescheduled season finale from Irwindale Speedway (CA) to Kern County Raceway. The change occurred just 10 days prior to the event, as a result of Covid-19 restrictions. It is a change that gives an edge to the championship leader Jeremy Doss, and creates a bigger challenge for championship runner-up “Fast” Eddie Secord entering the season’s concluding event. Photo by Sal Sigala, Jr.

“Moving to Kern is not what I was wanting at all”, Secord admitted. “This gives Jeremy the edge for sure. He’s been good there all year. I did get my first Spears (Modified Series) win there, so we hope for a good finish.”

On the other hand, Doss will enter the finale with a season high 18-point championship lead. The leading two combatants had jockeyed back and forth all season, with the largest previous lead held by Doss at seven points. Secord led the standings by five points through round five. The win at the Bullring at Las Vegas Motor Speedway (NV) was a huge boost for the 2018 SPEARS SRL Southwest Tour Series Champion, however. The move of the finale to Kern County Raceway was a bonus as well, but it doesn’t change Doss’ approach in the event.

“I don’t believe it changes our strategy, we still have the same goal in mind and that is to go win the race and championship”, Doss confessed. “I believe Kern favors me, just because that track, in general, has been one of my strong suits this year.”

Doss is used to tight championship battles, as he fought with Eric Schmidt, throughout his 2018 SRL Championship season. It is something at which Doss enjoys the challenge, but it also creates pressure on the Upper Lake, CA driver.

“I’d say it makes it both more fun and stressful”, Doss said. “It’s always nice to have a big points cushion, but I feel when it’s such a close battle it challenges us both to be better, which makes it fun for me anyways.”

Secord is a six-time Pro 4 Late Model Champion. He will be looking for his first championship in the Modifieds, after scoring his first two series victories in 2020. The driver from Hesperia, CA is also used to the pressure of a championship run, as well as the excitement it brings, as he related.

“I would say it’s been fun. Just being in the running for a championship of this caliber is pretty cool. Yes, it’s been stressful at times, but you have to keep going.”

Entering the penultimate event of the season at Las Vegas, Secord trailed Doss by a single point. But his worst effort of the season resulted in an eighth-place finish in the 37-car entry. The endeavor was hindered by an incident the prior week at Madera Speedway (CA), which left the car wounded and lacking the speed to run up front.

“I messed up the car before Vegas, at a race in Madera”, Secord admitted. “The car was bent up worse than I thought, and I missed it. We have had an awesome season and we will keep racing like we do.”

Doss enters the final event with the same outlook as any other race of the season. He will be looking for a victory, and to take home a coveted series championship that would set him apart from any other driver on the West Coast.

“Like I said before I enter every race with the same goal in mind, and that is to win and hope the championship comes along with it”, Doss began. “This championship would mean a lot to me. I think it’d be neat to be the only driver to have won a championship in both current Spears Divisions, and it’s always nice to add to the resume.”

Secord would also like to bring home the championship, but he realizes it will be an uphill battle, after his struggles at the “Bullring”. He has enjoyed competing against the JD Motorsports Team in 2020, after battling with Doss in Jeremy’s SPEARS SRL Southwest Tour Series Rookie-of-the-Year season in 2013. He knows that the competition with Doss and the Eddie Wilcox team is beneficial for his own team, and only makes them try harder.

“It would be pretty awesome (to win the championship), but Jeremy would really have to struggle, and we would have to win to make it happen”, Secord estimated. “To have the caliber of a driver like Jeremy and the Wilcox team makes you race harder all season. They don’t make mistakes, so you must be on your “A” game to beat them. We got a couple wins this year and that’s pretty cool.”

Likewise, Doss has enjoyed competing against Secord and the RBK / Secord Racing team in 2020. The two-time Pacific Challenge Series Champion has gained a lot of respect for the veteran racer, and looks forward to racing with him again this weekend.

“It’s been a blast competing against Eddie this year, he always races hard and clean, which I respect a ton. I am really looking forward to battling it out with him at Kern!”

Doss’ four-win season leads all drivers in the series. The team has run up front all season, with a worst finish of third, at the season opening All-Star showdown at Irwindale Speedway. To be as strong as Doss has been all season, it takes a group effort. Doss is thankful for those efforts.

Doss stated, “I would like to thank Eddie & Kori Wilcox for giving me the opportunity to race their car all year, as well as the entire crew (Duane Sharp, Eddie Wilcox Jr., Ty Thatcher, & Kaine) for always working so hard and providing me with a fast racecar. And of-course our sponsors: Wilcox Automotive, Peters Racing Engines, Pitstop USA, David’s Racing Products, PFC Brakes, Swift Springs and Horse Power Project.”

Secord has likewise had a great season, and the team and sponsors behind him are appreciated by the championship driver.

I’d like to say thanks to my whole team; Eric, Ken, Ward Jered, Cameron, and Lawson plus my family that backs me every race”, Secord began. “I appreciate all of them!!! Thank you to my sponsors, Pinnacle Peak Steakhouse, LES, KH Enterprises, Secord Motorsports, Race Car Factory, Naake Suspension, Photos by Ms. Mary, Total Power and my team, RBK. We will see were this last race ends and get ready for next year.”

The season finale for the SPEARS Modified Series will see an end to the longest season in its history, spanning from February 1st to December 19th. Doss can clinch the championship with a sixth-place finish in this weekend’s event. The battle for third in the standings will also be decided, with Travis McCullough leading William Guevara by a mere 10 markers. Jim Coffey has a comfortable lead on younger brother Ed, in the Rookie-of-the-Year chase, where he leads by 42 points.

The Modifieds will be joined by the SPEARS SRL Southwest Tour Series as well as the Pro Late Models, which will become the “SPEARS Pro Late Model Series presented by Sigma Performance Services” in 2021. For those not in attendance, the event will be broadcast live at www.SpearsRacing.TV, as well as on a delayed basis on MAVTV.