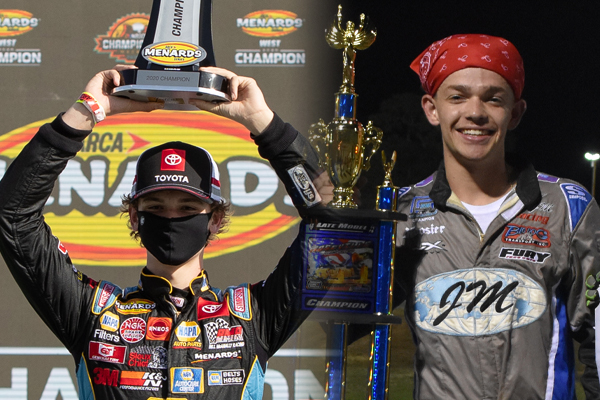 (January 4, 2021 from BMR PR) – Bill McAnally Racing today announced a two-team lineup for 2021, featuring Jesse Love and Cole Moore each competing for the championship in the ARCA Menards Series West.

Moore, 23, of Granite Bay, Calif., will be behind the wheel of BMR’s No. 20 NAPA Power Premium Plus Toyota Camry. He embarks on his first full season in the ARCA Menards Series West after winning two championships in late model competition, in 2019 and 2020. He previously raced with BMR in select ARCA West events between 2015-2017.

“We’re very excited to announce our driver lineup for 2021, with Jesse Love and Cole Moore,” said team owner Bill McAnally. “They are champion drivers and we are confident they will contend for the series title.

Love started racing at the age of 5, in quarter midgets. Since then, he has accumulated multiple track, regional, state and national championships. He finished in the top 10 of the SRL championship standings in 2019, while becoming the youngest driver to notch a top-five finish in an SRL race. In POWRi action that season, he became the youngest driver with a podium finish in POWRi National Midgets competition and the youngest West winner, with a BCRA victory at Kern County Raceway Park near Bakersfield.

He had a record-setting rookie season in winning the ARCA West title in 2020, sweeping the year-end awards in the series. In addition to winning three races, he garnered four pole awards and led the most laps. He also had the best average finish of 3.9 and ranked first for laps completed.

“I’m so grateful to get the call to be back and be able to run again for BMR in 2021,” Love said. “And being in the 16 NAPA Toyota makes it that much better. Growing up, watching the 16 win championships is something that I’ll always remember and I’m ready to get it back in victory and championship lane.

“As a driver, I want to race as much as I can in as many series’ as I can – and be in a winning situation in all of them,” Love said. “I know I can do this with Bill again in 2021. Thank you to NAPA AUTO PARTS for their massive support of me this year. I always look forward to winning races with NAPA on the hood.”

Moore is a second-generation driver. As a youngster, he started racing on two wheels – competing in motocross. He transitioned to racing cars after turning 16. He raced full seasons in the Pacific Challenge Series Late Models in 2015 and 2016. He also raced in the ARCA West during that timeframe, recording three top-10 finishes while making eight series starts with BMR between 2015-2017.

Moore won the Rookie of the Year Award in the Spears SRL Southwest Tour in 2018. He captured the SRL championship the following year, becoming the only driver to claim the rookie honor and tour title in back-to-back years.

In 2019, he also qualified for the Snowball Derby at Five Flags Speedway in Florida.

In 2020, Moore won a NASCAR Advance Auto Parts Weekly Series championship in the Late Model division at All American Speedway in Roseville, Calif. – with seven wins, 11 top fives and 12 top 10s in 12 starts.

In addition to competing at Roseville, he also raced a limited SRL schedule. Speed51, meanwhile, ranked him in the top 100 short track racers in the country for 2020.

“I’m extremely excited to have the opportunity to race and be a part of the best team on the West Coast,” Moore said. “I grew up watching BMR be the team that everyone aspired to be part of here in California and the West Coast.

“Over the years, I have developed a friendship with Bill McAnally and I’ve always made it known that I wanted to someday drive for him,” Moore said. “Now that I have developed as a driver and have championships on my resume, my time has come to be called upon to drive for this team. I’m very excited and very honored.”

“I also would like to note that I’m very excited to be teamed up with my good buddy Jesse Love,” Moore added. “I always enjoy Jesse’s energy. He’s a really good kid. It’s going to be a great year.”

The 2021 season will mark BMR’s 31st year with NAPA AUTO PARTS as a sponsor.

“We thank everyone at NAPA AUTO PARTS for their continued support,” McAnally said. “We strive to continue winning races and championships and provide NAPA with the best sales tool in the business.

“In addition to NAPA, we want to thank the other great sponsors we have,” McAnally said. “We are grateful for their support and continued loyalty.”

They include Toyota/TRD, NGK Spark Plugs, Curb Records, NAPA Filters, NAPA Belts & Hoses and NAPA Power Premium Plus; as well as Carlyle Tools and NAPA AutoCare and many other great sponsors.

BMR has won a record 10 series championships, including five titles in the past six years. The team has 104 overall wins in the East and West divisions of the ARCA Menards Series (formerly the NASCAR K&N Pro Series).