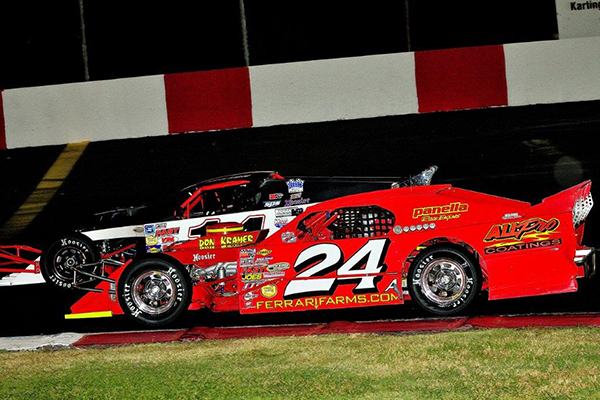 Winters and new track record holder Kyle Tellstrom of Ukiah lined up on the fourth row after the invert. Winters won the chase to the front then enjoyed a 2.412 second advantage at the finish.

“I love Madera Speedway. Thank you Mission Foods for putting this on. I got to call out to my crew. They’ve worked hard. Last time we were here we blew an engine. The engine that blew we put back in the car. The team rebuilt it. Worked hard to get this chassis right and it showed in this race,” Winters said.

Dustin DeRosier of Cloverdale lined up outside Klamath Falls, Ore.’s Rich Cobb on the start but immediately took control of the event. Tellstrom advanced from eighth into fifth by lap five in car no. 5k. The leaders ran two-by-two for the third position for several laps. Darrin Sullivan ran third before falling behind the trio of Ian Elliott, Tellstrom, and Winters.

Tellstrom worked to the outside of Elliott of Lakeport on lap 20 as they closed on second place Cobb. Cobb got sideways into turn one on lap 25, going up the race track into the path of Tellstrom. Tellstrom had to lift, allowing both Elliott and Winters to pass on the inside. Cobb was shuffled to fifth in the batting as well.

The top-four cars of DeRosier, Elliott, Winters, and Tellstrom ran nose-to-tail by lap 28 with Winters going outside Elliott to take second on lap 33. Winters then worked inside of DeRosier for the lead, grabbing the position on lap 36. Elliott and Tellstrom battled for over ten laps for the second position before Tellstrom finally earned the spot on lap 48 with an inside pass.

Tellstrom was already a distant second to Winters in heavy lapped traffic by that point. A caution never fell to bunch up the field and Winters drove ahead over the final 27 laps for the win. Tellstrom finished second followed by Elliott, tenth starting Keith Bloom, Jr., and DeRosier.

A red-hot battle for the Madera Late Model championship continued with Las Vegas’ Kyle Keller earning his first triumph of the campaign. The 40-lap feature saw Jason Aguirre and Keller line up as the front row starters while also being the top two in the standings.

Aguirre took the lead using the outside line with Keller using the bottom line. They ran within a few car lengths of each other for the first 26 laps of the event through lapped traffic. Aguirre was set to encounter a multi-car battle for fifth in front of him before the caution flew for third running Trevor Schlundt spinning on the front stretch.

Aguirre restarted on the top and maintained the top position. MST points leader Shaun Reynolds tangled with Mike Shapiro for fifth to require a caution in turn two on lap 32. Adam Coonfield spun on the first attempt for a restart.

On the second attempt, Aguirre and Keller could not get a clean restart. The caution waved and officials elected to give Keller the lead and drop Aguirre to second. Keller then chose the outside line that Aguirre had preferred. A strong restart for Keller allowed him to lead the final laps for the win. Aguirre finished second while Schlundt recovered for third. Ryan Reynolds and Loren Kutz rounded out the top-five.

Shaun Reynolds won the 30-lap Modified Super Toyota main event. Nick Thompson slowed at the start and was tagged from behind by Bill Gorden who was then hit by Ryan Reynolds. The caution flew and Thompson was unable to continue. The next caution fell on lap eight for Chris Hurles spinning in turn two.

Ryan Reynolds took his machine to the front, making his way to second by lap 14. He was unable to get within striking distance of Shaun at the finish, with Shaun Reynolds winning. Haley Bugg finished third over Gorden and Aaron Reaves.

Donny Large, Jr. led all 30-laps for the Hobby Stock victory. Large paced former champion Steve Schermerhorn for much of the main event as they darted through lapped traffic. 2020 champion Manny Gonzales, Jr. spun to set up a green-white-checkered finish. Large prevailed followed by Schermerhorn, Gonzales, and Harley Kennealy as the final finisher.

The Southwest Tour Trucks battled for 50-laps with points leader Curtis Burns making up for a second-place finish in June by winning in August. George Perret led the first 20-laps with Burns in pursuit. Burns took the lead, then navigated through side-by-side lapped traffic while Perret battled Schermerhorn.

Perret spun into turn one and collected Schermerhorn in the closing laps, with both trucks suffering heavy body damage. The race remained under green and both continued on behind Burns. Jesus Gonzalez-Quintero looked set to capitalize on their contact but slowed and pulled into the infield with four laps to go.

Shawn DePriest won the Mini Stock main event by leading only the final two laps. Gene Glover led the way while DePriest tried to overcome a fifth starting position. DePriest was up to second by lap two and spent much of the race trying to overhaul Glover. Glover and DePriest had a fender-bender exiting turn four with two to go, with Glover retiring to the infield while DePriest took the win. Rick Lea finished second with John Williams finishing third.

Madera Speedway returns on August 21 with Children’s Hospital Night featuring the Nut Up Pro Late Models, 51FIFTY Jr. Late Models, and Mini Cups vs. Bandoleros. Tickets will be available at www.RaceMadera.com or at the gate.