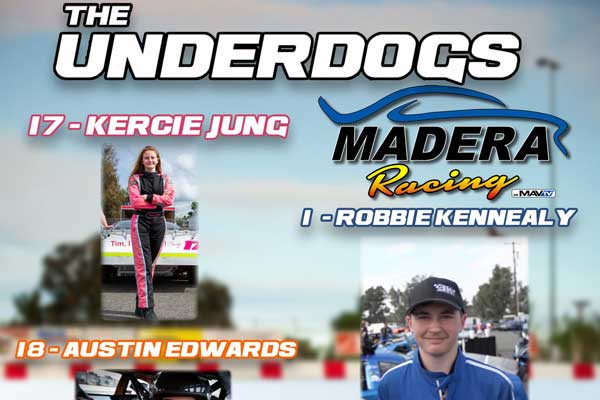 (May 14, 2020) – Madera Racing on MAVTV presents “The Underdogs”, a special about six 51FIFTY Jr. Late Model Series drivers who are expected to have breakout seasons in 2020. The episode airs Thursday, May 14th at 5pm and 8pm Pacific on MAVTV. The six drivers featured are Austin Edwards, Kercie Jung, Robbie Kennealy, Kabe McClenny, Elvis Rankin, and Jadan Walbridge.

Edwards, age 15 from Mentone, Calif., is the only Madera Jr. Late Model winner in the group. The former INEX Bandolero state champion won in the inaugural season for the Jr. series in 2016 at just 11 years-old. Success has been tough to come by since then, however, although Edwards has become an ace on the iRacing platform. He recently won the Jr. Late Model eSports championship by winning five out of the six races against an average of 30 young drivers per event.

Jung came to the Madera Jr. Late Model program after winning the Kern County Raceway Park Bandolero championship. She was also a participant in the Jr. Late Model Challenge Camp in 2019. In 2020, she will drive a chassis that won the 2017 Madera Pro Late Model championship when driven by fellow Bakersfield driver Buddy Shepherd.

Robbie Kennealy is one of three siblings who all race at Madera Speedway. Kennealy finished eighth in the 2019 Jr. Late Model standings while his younger brother Joey was the Mini Cup champion in the Mini Cup vs. Bandolero division. Robbie came directly into Jr. Late Models without previous experience in anything other than a dimunitive Quarter Midget.

Kabe McClenny is yet another Bandolero graduate and another veteran of the series. McClenny entered the division in 2017 with many notable podium finishes battling against high profile drivers such as Hailie Deegan. McClenny Bros. Racing punches well above their weight with the siblings of Kale and Kabe both competing on a regular basis in the Jr. Late Model division.

Elvis Rankin from New Mexico also participated in the Jr. Late Model Challenge Camp. Most notably for Rankin is his record as the youngest winner in the history of the USAC HPD Midget program, when he won a feature at Madera at 11 years old. Rankin brings personality and enthusiasm to the table with his racing career and is another Underdog driver who has used the iRacing platform to develop his skills.

Jadan Walbridge is one of the oldest of the Underdogs at 15 years-old. He came to Madera Speedway after a career in dirt Outlaw Karts. His grandfather was a successful pavement racer in the Northwest. Walbridge stepped up big in 2019 by winning the Jr. Late Model championship at the Las Vegas Bullring and also scoring three fast-times at Madera. He started off 2020 by testing and practicing with a broken foot, showing his tenacity and drive to fight for this year’s championship.