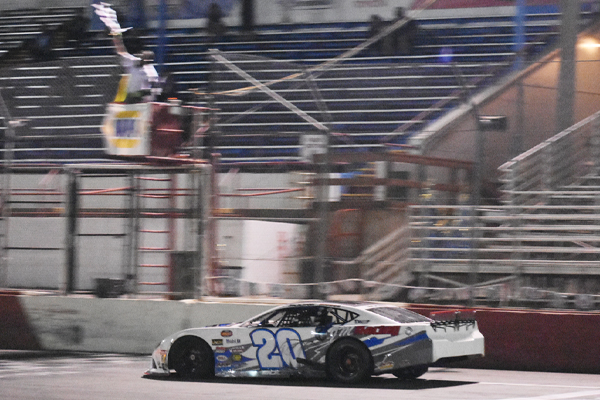 “It means a lot. Now that I’m thinking of it really. I grew up watching my dad race here. My dad helped Bill (McAnally) (remodel) the speedway. It feels really good and we got a lot of wins this year. That was a lot of fun,” Moore said of his $3,500 championship victory.

One of the toughest fields of NASCAR Late Models took to the one-third mile for a pair of 35-lap features. Galt’s Matt Wendt led from the outside pole alongside Denver, N.C.’s Gracie Trotter. Trotter and Wendt had contact exiting turn two on the second lap, handing Trotter the lead and bouncing Wendt backwards. Wendt then spun in turn four for the first caution on lap three.

Trotter went side-by-side with Moore before Trotter edged forward to lead lap seven. A caution flew for Tyler Caturegli spinning in turn four and Moore pitted under yellow. Moore was able to return and restart at the tail of the field.

The caution flag flew again on lap 12. On the following restart, Trotter had her third challenger of the race with Loomis’ Michael Mitchell. They traded the lead as they ran side-by-side closely until cautions waved on lap 19. Mitchell picked the outside on the restart and thundered ahead of Trotter. Moore and Chris Scribner collided for a caution on lap 25 that sent them both to the rear.

Caturegli was involved in a pair of incidents including with Scribner on lap 29 and in a tangle with Trans-Am racer Ethan Wilson of Loomis on lap 33. Mitchell persevered over a green white checkered finish to earn his first NASCAR Pro Late Model win ahead of Trotter, fast-time qualifier John Moore, Wendt, and Thomas Martin.

The second feature started with Shannon Mansch and Scribner unable to complete a clean restart, placing Cole Moore on the pole alongside Martin. Moore led the way while Scribner drifted back to the sixth position. Rick Scribner went up in sparks for a caution on lap 10. John Moore drove through the pack up to third by lap 17.

After a caution on lap 20, Cole Moore picked the inside of Wendt. John Moore followed into second position but could not close on Cole Moore. Cole won his seventh win of the year and the 2020 NASCAR Pro Late Model championship. John Moore finished the second 35-lap race in second over Wendt, Trotter, and Martin.

The 40-lap feature for the Jaws Gear & Axle Limited Modifieds again paid $500 to win and saw a new winner emerge from a chaotic event. Sierra Furia of Lakeport used the outside pole position to lead the opening lap over the ten-car field. Jason Philpot was up to fourth by lap seven. Auburn’s Derrick Doering made his first start of the season and hounded Furia for the lead.

Soon the top four of Furia, Doering, Loomis’ Josh Blackwood, and Philpot ran in a nose-to-tail formation. Jostling among the quartet allowed Philpot to go outside for second in turn two on lap 22. Philpot then climbed upstairs on Furia, but the pair made contact on the backstretch in a grinding crash. Furia was unable to continue while Philpot rejoined the action at the back at the field with 16 laps remaining.

Blackwood assumed the lead and maintained the top spot over Doering through a pair of late restarts. Coming to the checkered flag, Doering got into the back of Blackwood. Blackwood spun through the infield while Doering was penalized for the spin. Luke Kaper of Lincoln emerged as the winner ahead of Lincoln’s Mike Gorham, Philpot, Sammy Nuno, and Jon Yourd. Philpot’s five wins plus the third-place finish wrapped up the championship in the division ahead of Blackwood.

Sacramento’s Andrew Peeler won his fifth consecutive Super Stock main event along with his third consecutive championship as well. Auburn’s Blake Disomma led early before Peeler took over on lap six. Disomma was part of a four-car pack that raced two-by-two throughout the first half of the race. Roseville’s Roy Smith used the outside to advance to second position by lap 13. Roseville’s Andrew Kemp fell from the event with trouble on the right front of his machine, while Chris Paulson won a battle with Disomma for third. Peeler led Smith, Paulson, Disomma, and Diede for the win in the 30-lap affair.

Roseville’s Ray Molina completed a successful championship defense in the F4 division by taking his sixth win of 2020 in the 25-lap main event. Vic Theberge of Citrus Heights gave Molina all he could handle throughout the race. Molina tried the outside on several different occasions, finally knifing to the inside in turn two on lap 22. The move worked as Molina drove ahead for the win followed by Theberge, Matthew Fuhs, championship runner-up Rich Innis, and Jerry Nunes.

Jr. Late Model was yet another division where the champion won the finale, with 16-year-old Aidan Daniels of Fort Bragg earning his fifth triumph of the year in the 30-lap race. Daniels, the 2019 runner-up in the division, followed closely behind Lane Anderson for much of the event. Daniels finally pounced on an opening for the lead in turn one, taking over the top spot on lap 18. Anderson finished second followed by 2020 season runner-up Kenna Mitchell, and Trey Daniels.

Molly Laires of Linden became the latest first-time Roseville winner as she claimed the Mini Cup 20-lap event. A series of passing attempts for the lead by Bella Thomsen resulted in spins or close calls, with a relentless shuffling of the deck among the top-four in the running order. Thomsen and two-time 2020 winner Colton Nelson had a collision on lap 15 in turn two which handed the top spot to Laires. Laires led Nelson, Kenny Burton, Thomsen, and Evan Laires as the top-five at the line. Thomsen won the 2020 championship in her second season in the class.

All American Speedway continues October 23 with the NAPA AUTO PARTS 125 presented by CashIntheCan.com for the ARCA Menards Series West. Jaws Gear & Axle Limited Modifieds, Super Stocks, and F4s will join the action in a non-points event with cash purses. For more information, visit www.AllAmericanSpeedway.com The 2020 season at All American Speedway could not be possible without Sinister Diesel, Jaws Gear & Axle, JM Environmental, Riebes Auto Parts, and A-All Mini Storage.