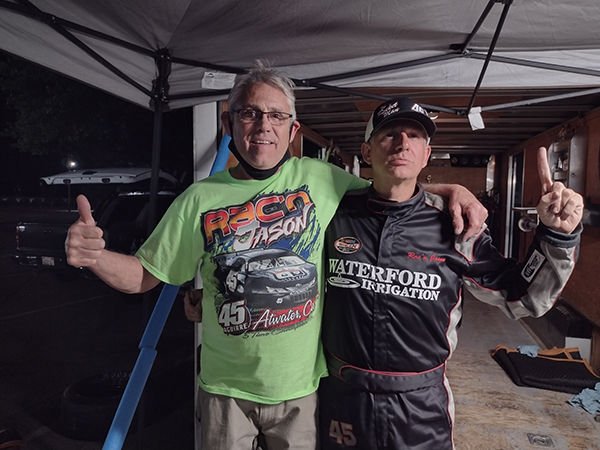 “That was a good one. We were counting on the highline to come in tonight. There really wasn’t anything there. We were definitely set up for the top side and yeah it was a little tight on the bottom but we made it work,” Aguirre said. “We’re going to bring the same set up (next week).”

Keller claimed fast-time and led the opening lap of competition. The first caution fell on lap eight for Mike Shapiro spinning in turn four. Keller picked the inside of Iest on the restart with the duo racing side-by-side for two laps. Iest slid behind Keller on the frontstretch before tagging him into turn one, sending Keller for a spin to bring out the caution on lap 10. Iest and Keller were both relegated to restart from from the rear with Aguirre assuming the top spot.

The caution flew again on lap 17 for Shapiro going around in turn four while he battled with the resurgent Iest and Keller. Richard Herzog spun a lap after the restart.

Iest continued to march through the field, taking fourth on lap 24 and then nabbing third a few laps later. Keller followed Iest throughout the run to the front. Shapiro and Herzog had one additional mix up in turn four that necessitated an eight-lap run to the finish. Aguirre started inside Racin Vernon and charged ahead for the win. Iest and Keller also went past Vernon in the closing stages relegating him to fourth in the final rundown. Howard Holden finished fifth.

Hailey Bugg won her first Modified Super Toyota main event. Bugg took the lead from Aaron Reaves on lap three and maintained the lead over restarts on lap nine and lap 15. Bugg faced pressure from Patrick Geiger. Geiger and Reaves had a grinding crash on the backstretch that required a lengthy red flag on lap 24. Bugg led Tim Kammerer over the final six laps with Nick Thompson rounding out the top-three finishers.

Lloyd Wren, Jr. of Bakersfield dominated the Hobby Stock 30-lap contest, leading the way ahead of Manny Gonzales, Jr. for the duration of the contest. Donnie Large, Jr. led an all second-generation podium with 15-year-old Harley Kennealy and Rick Lea rounding out the top-five.

Madera Speedway returns on April 24th with MAVTV-televised Nut Up Pro Late Model and 51FIFTY Jr. Late Model action, plus Mini Cups vs. Bandoleros and Legends of the Pacific. Tickets will be available on www.RaceMadera.com and www.MyRacePass.com
The 2021 season would not be possible without the support of Nut Up Industries, 51FIFTY LTM, Mission Foods, 805 Beer, Race 2B Drug Free, Competition Carburetion, Hoosier Tires, and Sunoco Race Fuel.