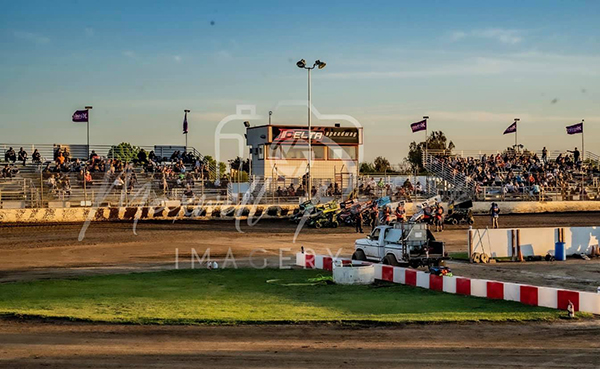 STOCKTON, CALIFORNIA (April 20, 2021) – Fans in the grandstands and the Back Row Challenge highlight this Saturday’s second round of the Delta Speedway presented by Financial Center Credit Union championship season. Super 600, Non-Wing, Restricted, and Jr. Sprints compete on the 1/7th mile dirt oval for the $1000-to-win track championships.

Up to 250 spectators are permitted in the grandstands with ticket sales taking place online at: tinyurl.com/2021deltatickets on MyRacePass and can also be found at www.DeltaSpeedwayStockton.com Tickets are $10 for adults ages 13 and up, $5 for kids ages 6 to 12, seniors 55+, and military, and kids 5 and under are free! Pit Passes can also be pre-purchased by competitors for $20 or purchased at the gate.

The Back Row Challenge will be offered to the top-two competitors after heat races and the front-row after the feature invert is pulled. If any of those four competitors choses to start the feature at the rear and can win, they will double their cash payout courtesy of Joe W. Lewis Snap-On Tools. The Back Row Challenge winner in Super 600 and Non-Wing will be worth $1000 while Restricted will be a minimum of $600 and Jr. Sprints $400.

Washington’s Dominic Carter won the Restricted opening night contest over “Big A” Austin Wood of Sacramento and Visalia’s Jett Barnes. Restricted competes in a 25-lap feature during championship points races at Delta. Blayden Graham of Bakersfield won the Jr. Sprints main event in round one, grabbing the 20-lap contest over Brody Rubio of Manteca and Oakdale’s Hayden Stepps.