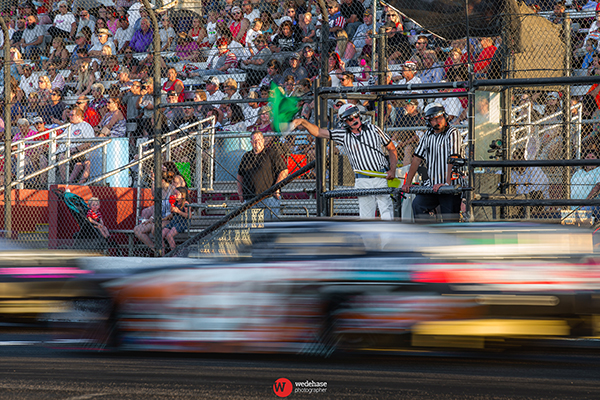 MADERA, CALIF. (March 31, 2021) – Madera Speedway will welcome fans back into the grandstands this Saturday night during the second round of the Nut Up Pro Late Models and 51FIFTY Jr. Late Models. Fans will return in limited numbers for the second MAVTV-televised race of the 50th season for the one-third mile speedway. Mini Cups vs. Bandoleros will also be in action this weekend. Photo by Jason Wedehase

All tickets will be priced at $15 and everyone that enters the facility must have a ticket. Tickets for the April 3rd race will be sold at the track at a remote location in front of the grandstands prior to fans entering the track.

Beginning at the April 17th event 90% of tickets will be sold via the Madera Speedway website prior to the event, with 10% reserved for sales at the track the day of the event.

Everyone in the grandstand area will be required to wear a face covering at all times, and groups made up of members of the same household will sit together with at least six feet of distance between them and the next group in all directions. Grandstands will open early at 1:30pm to allow fans to slowly arrive throughout the afternoon.

Concessions will be closed for the April 3rd event, but fans can bring food and drinks in for this single event. No alcohol will be allowed into the grandstands for April 3rd. Look for an announcement on the full Madera grandstand concessions opening starting on April 17th.

“This has been a tough road to travel during this process of navigating the pandemic with our operation and I would like to thank our fans that have supported us with patience during this process. These same fans also supported our sponsors by purchasing their products and this allowed the speedway to remain open during the last year. I would also like to thank the Madera County Health Department for their support during this process, working with them has been very positive as we continue to navigate the difficult guidelines set by the State,” Promoter Kenny Shepherd said.

Race fans can also tune in to the free live stream at 5:45 pm Pacific on the Short Track TV YouTube, presented by Mission Foods, 51FIFTY, and Nut Up Industries. The live streaming coverage will continue throughout the limited grandstand period for the fans around the world to experience the racing at Madera.

Carlos Vieira won the 100-lap, $5,000-to-win season opener in March after fending off former track champions Matt Erickson of La Grange and Austin Herzog of Clovis. Herzog spun coming to the white flag and was relegated to finishing outside the top-ten. Former champion Tyler Herzog knifed through the melee to finish second while Erickson came back for third. Jason Aguirre rounded out a trio of former champions in the top-five of the finishing order. Aguirre and Erickson have each added non-televised Madera Late Model wins over the last two weeks as well.

Jr. Late Model graduates have made their mark across the entire motorsports landscape including in the Pro Late Model competition where drivers such as Bakersfield’s Seth Wise and 2020 Jr. Late Model champion Bradley Erickson of Phoenix are expected to be strong contenders throughout the 2021 season. Portland’s Jadan Walbridge, with four career 51FIFTY Jr. Late Model fast-times, will race as a teammate with six-time Jr. winner Austin Herzog for the next two rounds of the Pro Late Models as well.

Saturday’s Pro Late Model feature will be an 80-lap affair with a 50-lap opening segment followed by a stop for adjustments and MAVTV interviews. A 30-lap sprint to the finish will determine the winner.

In the 51FIFTY Jr. Late Models, Kale McClenny’s narrow win over Texan Barrett Polhemus makes him the only previous race winner in the talented field of drivers ages 10-16 years old. An early incident between Ethan Nascimento and Idaho’s Jacob Smith impacted the complexion of round one tremendously, as the wreck also collected fast-time qualifier Kercie Jung of Bakersfield. Those three drivers will be hungry for their comeback this weekend along with opening night third place finisher Brody Moore of Colorado.

Washington’s Kasey Kleyn – age 12 – challenged for a top-five throughout the season opener before ultimately finishing seventh. He has practiced and raced at Madera over the last two weekends looking for the pace to take a win in this Saturday’s 70-lap race. The race is divided into a 40-lap segment and a 30-lap finish.

The Mini Cups vs. Bandoleros saw the overall win go to the Bandolero of Logan Chambers in his Madera debut while fellow debutant Sam Wedehase won the Mini Cup portion of the proceedings. Wedehase has since gone on to be one of the only Mini Cups with an overall win in the combined division, claiming a victory at Roseville last weekend. The youngest drivers at Madera Speedway will compete in a 30-lap main event on Saturday.

Action gets underway on Friday with practice from 5pm until 8:30pm with pit gates opening at 3pm. On Saturday, pit gates open at 11:30am with practice at 1:45pm. Qualifying hits the track at 3:30pm followed by heat races. Short Track TV goes live at 5:45pm with all three features to follow.