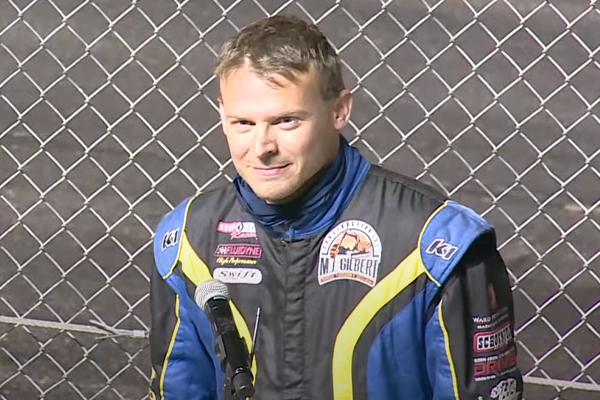 MADERA, CALIF. (March 20, 2021) – Multi-time Madera Speedway champion Matt Erickson kicked off the Madera Late Model season in style on Saturday night, using a late race restart to charge past 2019 Nut Up Pro Late Model champion Austin Herzog for the victory. The 40-lap event opened the points season for the non-MAVTV “club” Late Model division, utilizing the same rules and procedures as the Nut Up Pro Late Model Series. Erickson extended his reign as the winningest Late Model driver at the one-third mile speedway in the process.

“Just drove the heck out of it,” Erickson said. “Even though the track was green it was good up there for about three laps. It was just hard racing. We finally pulled it off. It’s great to be back in victory lane after missing it for about two years.”

Herzog led time trials before an exciting heat race with Erickson. Erickson won the heat race by .028 seconds but Herzog landed on the pole for the feature with the straight up start from qualifying.

The third-generation Herzog jumped ahead with the lead while Las Vegas’ Kyle Keller held off Erickson and Jason Aguirre for second. The battle continued through lapped traffic on lap 27. Mike Shapiro spun making a pass on Richard Herzog for the eighth position, forcing a caution flag on lap 30 and a narrow miss for Austin Herzog as he avoided the spin.

Herzog restarted inside Keller with Erickson in the third spot. Erickson worked underneath Keller for second on lap 32 but remained five car lengths behind Herzog. Brandon Burd spun in turn two on lap 35, setting up a five-lap shootout between Herzog and Erickson. Erickson took advantage of the outside line, storming to the top spot on lap 36 by .029 seconds. Herzog clawed back, tagging Erickson exiting turn four as they came to the white flag. Herzog tried again on the final corner, knifing inside but falling short by half a car length at the stripe. Aguirre, Keller, and Juleson rounded out the top-five.

Bakersfield’s Mike Nicks won his first Madera Hobby Stock race by taking the 30-lap feature. Nathan Casillas led from the pole while Nicks and Fresno’s Nick Rowe battled for second. Casillas slowed in turn four which brought out a caution and handed Nicks the lead. Manny Gonzales, Jr. went underneath Rowe for second on the restart, with Rowe drifting back to fourth.

Rowe then turned his race around on the extended green flag run, passing Casillas for third then using a three wide move in lapped traffic to take second. Nicks led the rest of the distance over Rowe, Gonzales, Casillas, and 15-year-old rookie Harley Kennealy.