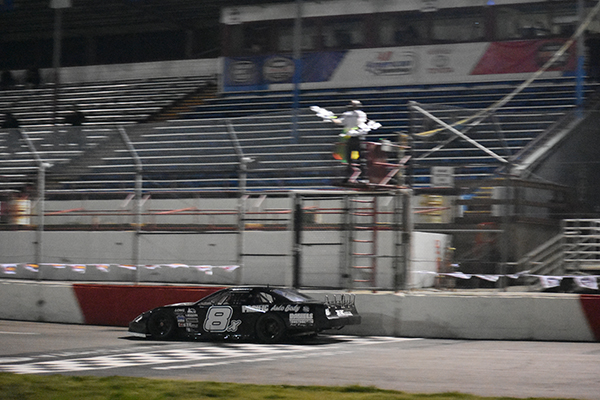 ROSEVILLE, Calif. (March 28, 2021) – 2020 All American Speedway Jr. Late Model champion Aidan Daniels earned perhaps the biggest win of his career on Saturday night, earning a win during the 2021 season opener in Roseville for the NASCAR Late Models. Daniels won the second in a pair of 35-lap Late Model races that made up an eight main event line up of NASCAR Advance Auto Parts Weekly Series racing on the one-third mile. Races were held on www.AllAmericanSpeedway.TV without spectators in attendance. Photo by Don Thompson

Daniels – out of Fort Bragg – finished second in the opening 35-lap contest which lined him up seventh alongside winner John Moore after the eight-car inversion. The second race was tumultuous early when Galt’s Matt Wendt and Loomis’ Michael Mitchell collided for the lead in turn one. Over half a dozen cars spun or suffered contact, with the night ending for Calvin Hegje and Rick Scribner.

When the race restarted, Lance Halm of Roseville assumed the lead. Auburn’s Thomas Martin took over from the outside to lead lap five. Daniels passed Halm for second on lap 11. Kenna Mitchell and Shannon Mansch spun on the backstretch for a caution lap 17. Daniels seized the opportunity to drive past Martin on the outside to lead lap 19. Martin and Wendt battled for second while Daniels drove ahead for his first career NASCAR Late Model win. Wendt, Martin, Moore, and Halm rounded out the top-five.

Mansch led Kenna Mitchell in an all-female front row for the first 35-lap contest. Mansch jumped ahead before Mitchell spun on the front stretch on lap four, nearly collecting Moore. Daniels restarted outside Mansch but fell back to fifth by lap nine. Michael Mitchell stopped on the front stretch on lap 18 for the next caution, with Martin the next driver to go in the wrong direction on a restart. Martin and Wendt eventually had contact on the backstretch. Wendt slowed from damage to bring out the caution on lap 25.

The restart placed Moore in the prime position to snatch the lead from Mansch, taking over on lap 26. Mansch got shuffled into three-wide battling where Daniels emerged in second. Moore, Daniels, Martin, Mansch, and Halm were the top-five at the finish.

One of the strongest fields for a Modified points race in recent memory produced an unpredictable race, with Eric Price of Rio Linda grabbing the win. Lincoln’s Mike Gorham led much of the race with 2020 champion Jason Philpot working past Windsor’s Sammy Nuno for second by lap 13. Loomis’ Josh Blackwood stopped to require a caution on lap 17.

Gorham chose to restart inside Philpot. The duo raced wheel-to-wheel before Colfax’s Ralph Bailey spun in turn two. The leaders made hard contact avoiding Bailey, eventually ending Gorham’s race. Price made the decisive pass of Philpot on the ensuing restart to claim the victory. Nuno, Rick Andersen, Rocklin’s Tyler Wentworth, and Lincoln’s Luke Kaper made up the top-five, while Philpot fell to seventh at the finish.

Roseville’s Josh Whitfield swept fast-time and the 30-lap main event in the Super Stock division. Antelope’s Chris Paulson led the first two circuits then 2020 champion Andrew Peeler took over on lap three. Whitfield passed Paulson on the outside on lap eight and Roseville’s Roy Smith did the same on lap nine for third.

Whitfield reeled in Peeler before debris brought out a caution on lap 17. Whitfield took the lead on lap 19, but Peeler stayed within a car length of him for several laps. Jeremy Fritts of Roseville spun from a right rear flat tire to set up a green-white-checkered sprint to the finish. Whitfield hung on for the win over Peeler, Smith, Paulson, and Tim Walters.

Stephen Crook of Fernley, NV won his first F4 main event leading wire-to-wire in the 25-lap race. Sun Valley, NV’s Rich Innis collided with Nathan Cleaver in turn three for a caution on lap five. Innis charged through the field to pass Dennis Crook for second. The top-three of all-Nevada cars battled closely to the finish. Innis looked inside Stephen Crook in turn one on the final lap but slowed after the maneuver. Stephen and Dennis Crook finished one-two with Jess Yendes driving for Ray Molina in third. Innis and Brian Langley for Vic Theberge rounded out the top-five.

All American Speedway continues its 2021 season on Saturday April 10 with BMR Drivers Academy, Modifieds Twins, Super Stocks, F4s, Mini Cup/Bando, and UTV Racing. Ticket details will be shared soon as speedway officials anticipate grandstand attendance for the first time in over 18 months at the track.

For competitor information including rules, forms, and practice registration, visit www.AllAmericanSpeedway.com/competition Participants are required to fill out a COVID-19 waiver and pre-screening form.

Every round of the 2021 season can be followed live or on-demand at www.AllAmericanSpeedway.TV

All American Speedway wants to thank @the Grounds for their support along with partners such as Jaws Gear & Axle, JM Environmental, Sinister Diesel, and Riebes Auto Parts for making this season possible. Companies interested in supporting these events can contact All American Speedway at (916) 786-2025. Without competitor support and local community partners, these events would not take place.