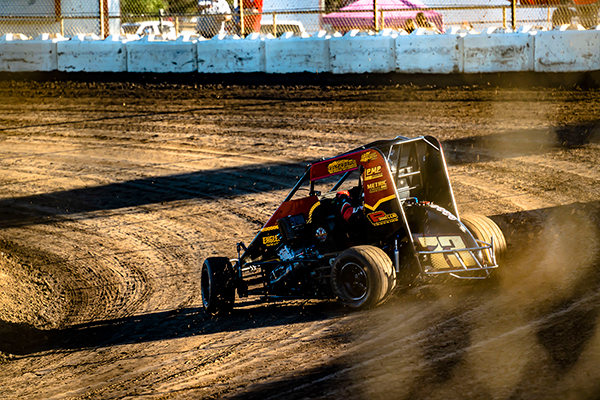 STOCKTON, CALIFORNIA (October 30, 2022) – A pair of Delta Speedway presented by Valley Strong Credit Union’s best champions triumphed in the biggest night of the year as Stockton drivers Caden Sarale and Nikko Panella scored during Turkey Bowl XXIII on Saturday. Each of their wins paid $2,000 to win. Nathan Ward of Bakersfield and Maya Mauldin of Rancho Murieta also found victory lane in the annual classic with their victories paying $1,000 to win. Photo by Maxwell Patrick Imagery

Saturday’s action wrapped up the two days of Micro Sprint racing where 112 competitors were in action on the 1/7th mile dirt oval in Stockton, Calif. Friday’s preliminary heat races, qualifiers, and Knock Out races set the lineups for the championship features on Saturday.

Medford, Ore.’s Austin Torgerson won the pole position for Non-Wing after Friday’s Knock Out race. 22 cars started the 40-lap feature with Torgerson and Panella on the front row. Panella wasted little time, taking the lead around the outside within the first 200 yards of the race. Throughout the contest, Torgerson ran within a few car lengths of Panella. A caution on lap 36 set up a four-lap shootout.

Panella held station for a two-car length win worth $2,000 in his third career Turkey Bowl win. The win also added to a great dual championship season for the Stockton driver, after winning both the Non-Wing and Super 600 track championships.

Torgerson, Jeffrey Pahule, Jr. of Brentwood, 12th starting Caden Sarale, and Cody Gray of Auburn rounded out the top-five. The oversized field of 47 Non-Wing entries staged a pair of B-Mains with wins going to Tim Vaught of Atwater and Sacramento’s Austin Wood.

Three-time dual Delta Speedway champion Caden Sarale continued to back up his resume as he won his third Super 600 Turkey Bowl of the last four seasons. Grass Valley’s Izaak Sharp started on the pole for the 40-lap affair and battled with Sarale for the top spot. The pair of No. 24 machines darted around the speedway side-by-side for the first two laps before Sarale took over the lead.

Austin Wood drove into second past Sharp on lap 23 before the first caution of the race came out on lap 28. Wood stopped and had to surrender his position, restarting 14th. Sarale charged ahead to a one second advantage over Sharp at the finish. Sarale earned his sixth Turkey Bowl win for $2,000.

Eighth-starting Brandon Carey of Ripon advanced to third while Fresno’s Mattix Salmon drove from 15th to finish fourth ahead of Carsen Perkins in fifth. Eric Botelho won the 15-lap B-Main.

Bakersfield’s Nathan Ward was the deepest starter to take a Turkey Bowl win, driving from sixth on the grid to win the 35-lap, $1,000 Restricted race.

Castro Valley’s Andrew Smith took the lead on lap one, driving from the outside pole around 2021 Jr. Sprints champion Brody Rubio of Manteca. Ward took over second from Andi Jones on lap 20 and worked on tracking down Smith. Smith flipped while driving up the cushion in lapped traffic in turn one, however, for a heartbreaking end to his Turkey Bowl chances.

Maya Mauldin of Rancho Murieta led all 30-laps for the $1,000 to win Jr. Sprint Turkey Bowl. The best battle of the main event was for the second position where 2022 champion Briggs Davis of Manteca and Haven Sherman of Citrus Heights raced. Sherman nabbed the second spot on the final lap of the feature, relegating Davis to third. Heston Stepps of Oakdale and Alex Ranuio of Stockton rounded out the top-five.

The Turkey Bowl XXIII concludes the 2022 season for Delta Speedway presented by Valley Strong Credit Union. A Championship Awards Banquet will be held during the off season before another season of dirt racing in 2023.