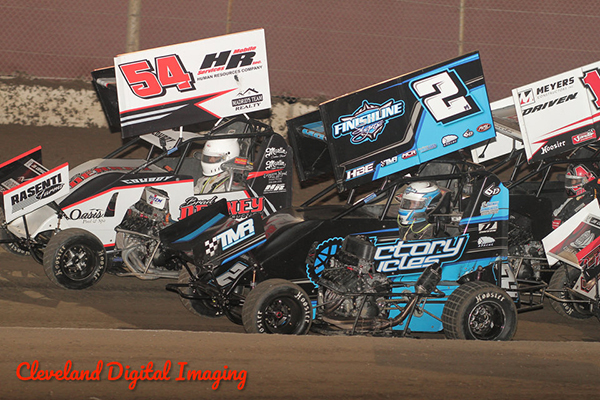 STOCKTON, CALIFORNIA (September 22, 2020) – Delta Speedway presented by the Financial Center Credit Union is quickly closing on its 2020 $1000-to-win championships, with Saturday’s penultimate round on tap. Super 600, Non-Wing, Restricted, and Jr. Sprints compete at the 1/7th mile dirt oval in Stockton, Calif., with drivers hoping to add their names to a distinguished list of champions over the 33-year history of the venue. Photo by Chris Cleveland

Caden Sarale of Stockton continues his charge towards a sweep of the Super 600 and Non-Wing championships for the second consecutive year, with a 109-point advantage in Non-Wing and a 92-point cushion in Super 600. Sarale won the Saturday Super 600 feature at the Dual at Delta before winning the Non-Wing main event on Sunday. That Labor Day weekend success has moved Sarale even closer to his historic accomplishment.

Race wins will be on the minds of drivers in both divisions, however, as $500 is up for grabs in each 30-lap feature. Only four different drivers have won Non-Wing main events this year, with Sarale’s two wins placing him ahead of second in points TJ Smith with three wins. The rest of the top-five in the standings, including French Camp’s Sage Bordenave, Rocklin’s Tucker Lacaze, and Brentwood’s Blake Bower, are still winless in 2020. Former double track champion Brandon Carey of Ripon is also winless this year from sixth in the championship.

In Super 600, Sarale has four victories while second in points Travis Labat of Livermore still seeks a 2020 checkered flag. The balance of the top-five each have a single win to their credit this year including 2018 champion Nikko Panella, Dual at Delta winner Alex Panella, and Rickey Sanders of Watsonville. Raio Salmon has six wins over the last three seasons at Delta, running sixth in the standings while aiming for her first trip to victory lane this year.

Restricted sees a tight championship points battle, with Tracy’s Brandon Riveira on top by 18 markers over Fresno’s Mattix Salmon. Pleasanthill’s Colin Kirby, Brentwood’s Isabel Barnes, and Fresno’s Reilee Phillips round out the top-five. The Restricted competitors will battle for 25-laps and no less than $300 to win the main event. Barnes would like to join Alex and Nikko Panella as drivers who have been champions in both Jr. Sprints and Restricted.

Speaking of Jr. Sprints, Lucas Mauldin of Rancho Murieta is attempting to successfully defend his 2019 crown. He holds an 18-point lead over Tracy’s Kyle Fernandez on the strength of three wins. Hayden Stepps of Oakdale, Brody Rubio of Manteca, and Peyton Whitehouse of Pleasanton round out the top-five. Delta’s youngest drivers race for 20-laps and a guaranteed $200 to win.

Pit gates open at noon with the driver’s meeting at 4:30 pm and hot laps to follow. Come hungry as Royce Farms will be serving up their legendary race track BBQ.