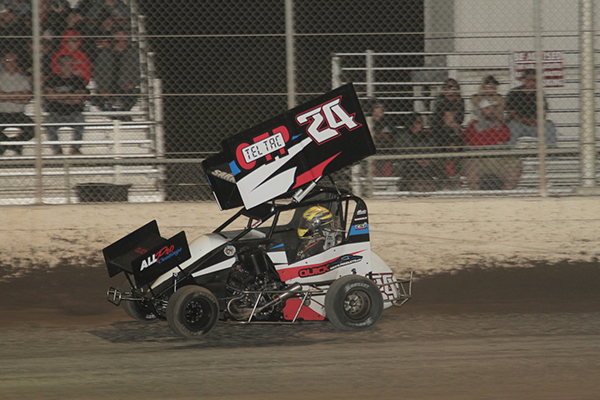 STOCKTON, CALIFORNIA (April 6, 2021) – Delta Speedway presented by the Financial Center Credit Union welcomes race fans back to the 1/7th mile dirt at the San Joaquin County Fairgrounds on Saturday night, opening its 35th season of competition with up to 250 spectators permitted in the stands. Photo by Chris Cleveland

Ticket sales will take place online at: https://tinyurl.com/deltaopeningdaytickets on MyRacePass and can also be found at www.DeltaSpeedwayStockton.com Tickets are $10 for adults ages 13 and up, $5 for kids ages 6 to 12, seniors 55+, and military, and kids 5 and under are free! Pit Passes can also be pre-purchased by competitors for $20 or purchased at the gate.

Delta Speedway has enjoyed a strong run under the tutelage of Bob & Tiffanie Panella and will continue to award track championships in four Micro Sprint divisions. Super 600, Non-Wing, Restricted, and Jr. Sprints have thrilled spectators young and old with their methanol-burning, open-wheel excitement.

Stockton’s Caden Sarale has ruled the speedway for the past two years, becoming the only driver to sweep the championships in Super 600 and Non-Wing on back-to-back seasons. Drivers will be aiming to knock Sarale off the top of the pedestal for the $1000-to-win championship titles at the end of the season. Both divisions will compete in 30-lap, $500-to-win features along with ten-lap heat races and group qualifying sessions.

Restricted was claimed by Tracy teenager Brandon Riveira in 2020. The first step into “full-size” dirt racing for many of the division’s participants, the courage and skill displayed in this division is second to none. Feature events for Restricted are 25-laps for a guaranteed $300-to-win along with heat races and time trials.

Rancho Murieta’s Lucas Mauldin narrowly topped Tracy’s Kyle Fernandez to be the champion in Jr. Sprints, the youngest division at the speedway. Jr. Sprints do not qualify and instead race in a pair of heat races to set their positions for a 20-lap feature for a guaranteed $200-to-win.