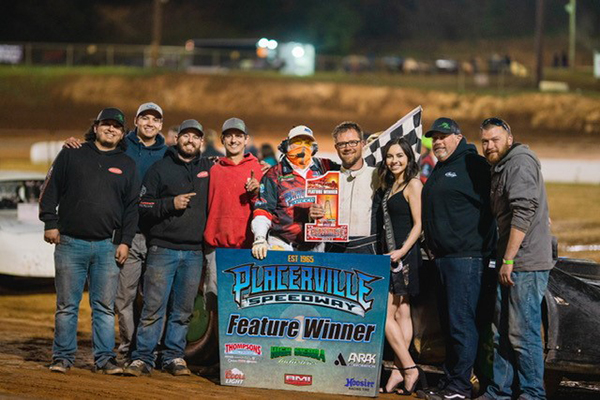 (April 25, 2021 by Gary Thomas) – The Placerville Speedway hosted its annual “Tilford Tribute” on Saturday and showcased some fantastic competition during the biggest night of the season for the Ltd. Late Model and Pure Stock divisions. Photo by Christopher Silva
Claiming victories at the event were Jay Sears with the traveling Tri-State Pro Stocks, Ray Trimble in the Ltd. Late Models, Nick Baldwin in the Pure Stocks, Wyatt Lakin with the Mini Trucks and Joel Hannagan with the Vintage Hard Tops.

In the 25-lap Tri-State Pro Stock main event it was Chris Smith who charged into the lead from the outside of row two. Despite several caution periods early on Smith hung tough until Reno, Nevada driver Jay Sears was able to take command on lap 12, just prior to a yellow waving one circuit later. Sears hung tough and withstood a late challenge from Walter Ball to pick up the $1,000 victory in the series debut at the speedway.

The Ltd. Late Model feature saw a dramatic 20-lap contest. Garden Valley’s Jay Norton led at the waving of the green flag, before Dan Jinkerson took over the top spot on lap two. Norton stayed close to Jinkerson as the pair put on an entertaining show for the crowd on hand. The biggest moment of the race came on lap 12 when Norton got into the back of Jinkerson and sent him for a spin to bring out a yellow. Officials proceeded to make a rough driving call on Norton, putting an end to his night.

The 25-lap Pure Stock finale was a rough and tumble affair with excellent racing but also featured an excessive amount of caution periods. Dan Jinkerson and Nick Baldwin shared the front row and fought tooth and nail during the opening lap. Jinkerson scooted ahead but felt heavy pressure from Baldwin every step of the way. Following a lap 10 restart Baldwin battled his way to the lead and hung tough during a number of slow downs to pick up the big victory on Tilford Tribute night.

Rookie driver Wyatt Lakin continued his blistering pace to the season by securing his third Mini Truck triumph in as many starts. Lakin was part of an outstanding three truck battle over much of the race before taking the lead and pulling away. He crossed under the Ron Stahl checkered for the win over Austin Struthers, Mike Miller, Howard Miller and Thomas Jenson.

Veteran Joel Hannagan dominated the Vintage Hard Top finale winning with ease over the rest of the field.