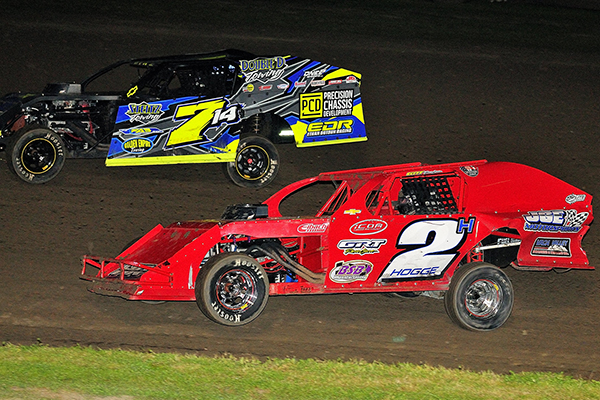 WATSONVILLE, CALIF. (May 14, 2021) – Salinas’ Bobby Hogge IV led all 25-laps for Friday’s IMCA Modified feature win at Ocean Speedway in Watsonville. An exciting Hobby Stock feature finish and a competitive Western Midget Racing main event were among the highlights at the Santa Cruz County Fairgrounds quarter-mile. Friday marked the second event of the 2021 season to have fans in the grandstands. Photo by Top Dawg Photos

Hogge led time trials, won his heat race, and claimed the dash win, while West Coast Stock Car Hall of Famer Jim Pettit II won the second heat race. The highly-accomplished duo made up the front row with Hogge pulling ahead to lead lap one.

Pettit tried to close in lapped traffic while past champion Cody Burke battled with JC Elrod of San Martin for third. Hogge held the lead through a restart on lap ten. A late caution set up a sprint to the finish but Hogge maintained the top position. Pettit, Elrod, Tim Balding, and Austin Burke rounded out the top-five at the checkered flag, with Cody Burke ultimately finishing sixth.

San Jose’s Joe Gallaher put in the drive of the night with a come from behind win on the final lap of the 20-lap Hobby Stock feature. Prunedale’s Quintin Harris lost an engine on lap nine and surrendered the lead as well.

Jerry Skelton assumed the top position as the race stayed green, enjoying an advantage of more than four seconds over the field. Gallaher chipped away at the advantage of Watsonville’s Skelton, pulling Gallaher completed the pass exiting turn four to take the exciting win. Ryan Muller, Norm Ayers, and Tony Oliveira rounded out the top-five.

Fresno’s David Prickett affirmed his place at the top of Western Midget Racing, earning his 15th career win in the production-powered series.

The 20-lap feature started with Antioch’s Shawn Arriaga losing a wheel as he entered turn one. Stockton’s John Sarale took over the top position while Bower bicycled trying to pass on the inside. Prickett attempted a two-for-one on Sarale and Bower before cautions flew for Gary Dunn spun in turn four.

Both Prickett and 2020 Delta Speedway Micro champion Caden Sarale passed Bower on the restart. Prickett then worked up the inside to take the lead on lap seven. Prickett drove ahead for the victory while John Sarale used the outside line to roll ahead of his son Caden for second. Bower and Lodi’s Nate Wait rounded out the top-five.

Brentwood’s “Fast” Fred Ryland led all 20-laps for the IMCA Sport Mod victory. Ryland qualifying and won his heat race as well. San Jose’s Randy Miller finished second ahead of the other heat race winner of the night, Dennis Simunovich. Mike Ficklin of Paradise and Trevor Clymens of Brentwood were the balance of the top-five.

After a runner-up finish last Friday night, Travis VanGilder won the Four Banger feature. He topped Kate Beardsley and Nicole Beardsley for the win in the 15-lap affair. Wayne Reeder of Watsonville and Bill Beardsley finished fourth and fifth.

Ocean Speedway will be in action this Friday night with the Ocean Sprints presented by Taco Bravo. The 360 Sprint Cars will be joined by IMCA Sport Mods, Hobby Stocks, Four Bangers, and South Bay Dwarf Cars. Tickets are available online at www.OceanSpeedway.com