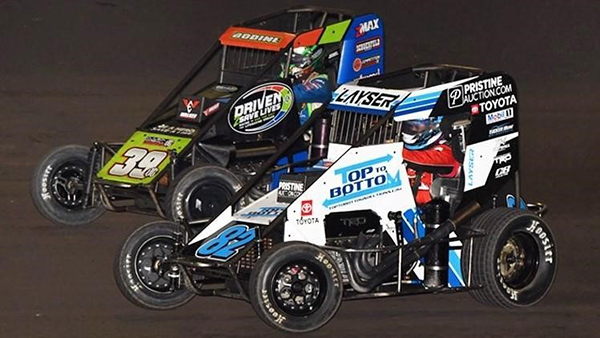 The three drivers are separated by a scant margin with Windom at the top of the standings by 11 over Courtney and Thorson 32 behind. Each has previously celebrated a USAC National championship in his career with Windom taking Silver Crown (2016) and AMSOIL National Sprint Car (2017) titles, Courtney the 2018 Sprint and 2019 Midget, and Thorson with the Midgets in 2016.

For all intents and purposes, the Bakersfield round will be the final opportunity for each driver to put themselves in the driver’s seat for the series championship. At Bakersfield, full points will be allotted to all licensed USAC National Midget drivers and teams, with a maximum of 84 points available. At the two Merced (Calif.) Speedway events later this weekend, Nov. 20-21, only 50 appearance points will be served out to all competitors across the board, regardless of finishing performance, with no room to make up ground. In essence, each driver’s results at Bakersfield will mean everything in determining a champion.

Point leader Windom (Canton, Ill.) took over the point lead last Saturday night at Arizona Speedway with a fourth-place finish coupled with Courtney’s mechanical issues that sidelined him with a 22nd place finish. Windom’s only previous Bakersfield appearance came in 2019 where he won his heat but flipped on the 2nd lap of the feature. He restarted but only managed a 16th place finish.

Courtney (Indianapolis, Ind.) was 4th at Bakersfield in both 2017 and 2019 while Thorson (Minden, Nev.) will make his first appearance with the series at Bakersfield since 2017 where he set fast qualifying time and finished 3rd.

While the championship contenders will have their own race-within-a-race, the rest of the field will have the absence of points weighing on their minds, with only a feature victory in their sights. They include Kyle Larson, the defending race winner at Bakersfield who also set quick time in the process. Larson (Elk Grove, Calif.) has made six USAC National Midget starts in 2020, winning four and finishing 2nd in the other two.

Logan Seavey (Sutter, Calif.) won the November Classic at Bakersfield in 2018 in grand style by driving around Rico Abreu in the fourth turn on the 30th and final lap to score the victory, which also locked up the series title for him in one fell swoop.

Tanner Carrick (Lincoln, Calif.), meanwhile, is the only driver to have finished inside the top-10 in each of the past three Bakersfield USAC National Midget races with a 10th in 2017, a 6th in 2018 and another 10th in 2019.

Spencer Bayston (Lebanon, Ind.), the 2017 USAC National Midget titlist, collected a runner-up finish in 2017 and a 4th in 2018 for his two best Bakersfield results.

Thomas Meseraull (San Jose, Calif.) was a top-ten runner with the USAC National Midgets at Bakersfield all the way back in 2000, finishing 7th. In 2019 at the 1/3-mile dirt oval, Meseraull ripped through the pack from his 20th starting position to finish 8th and earn hard charger honors.

Robert Dalby, the reigning USAC Western States Midget champion from Anaheim, Calif., is one of six drivers to have started each of the three most recent USAC National Midget features at Bakersfield in 2017-18-19 along with Bayston, Courtney, Carrick, Michael Pickens and Zeb Wise.

USAC NOS Energy Drink National Midgets and California’s Bakersfield Speedway have a history that dates back six decades. Davey Moses won the first trip by the USAC National Midgets in the summer of 1959. Over that period, 21 series races have been held at the lightning-quick 1/3-mile dirt oval with Jay Drake and Billy Vukovich serving as the winningest drivers with the series at Bakersfield with three apiece.

Tuesday at Bakersfield, the USAC NOS Energy Drink National Midget / USAC Western States non-points Midget event will be joined by the California Lightning Sprints. The drivers meeting takes place at 5pm Pacific with hot laps beginning at 6pm. Grandstands are closed to all spectators. Pit passes are $40 for USAC members & $45 for non-members.

The NOS Energy Drink November Classic from Bakersfield will be streamed live on FloRacing at https://bit.ly/2Zs7zFP.