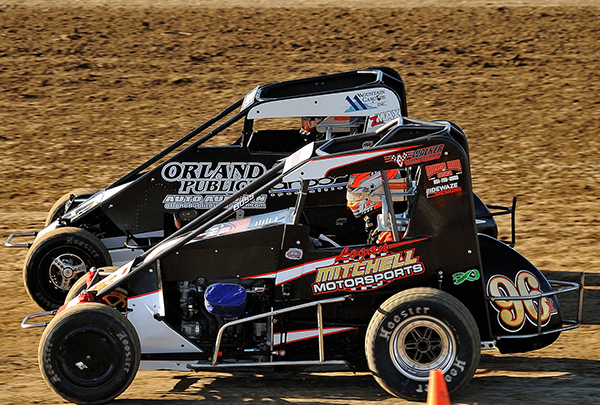 WATSONVILLE, CALIF. (June 9, 2022) – After a three-week break from a busy 30-race slate, the Western Midget Racing presented by Masters Design and Construction drivers will duel in a Northern California doubleheader. WMR’s stock production-powered Midgets will race at Ocean Speedway during Friday’s Pombo/Sargent Classic in Watsonville before venturing back to the Contra Costa County Fairgrounds for the second Antioch Speedway stop of the year on Saturday. Photo by Top Dawg Photos

The drivers in Western Midget Racing have been staying busy during the break. Oakley’s Bryant Bell spent time racing Micro Sprints and wrapped up his freshman year at Freedom High School. Bell will be driving the Toyota Walnut Creek-sponsored Zero Nine for car owner Tony Boscacci, with Antioch serving as his home track. His WMR championship winning teammate Blake Bower of Brentwood ran with the USAC Western Midgets at Ventura on May 21st, earning a third-place finish after starting on the pole. Bower has earned three wins this year in the No. 9 Orland Public Auto Auction Spike chassis.

2019 Ocean WMR champion David Prickett of Fresno is also the series’ all-time winningest driver. His down time was spent with a growing fleet of puppies at the Prickett compound. He climbs back aboard the No. 22Q Neverlift Motorsports entry this weekend.

The busiest driver on the circuit is Las Vegas’ Kyle Hawse, who has run all 11 races in the Sunland Wood Products No. 20 Triple X chassis. Hawse used the break to spend time with his family before the traveling picks back up for the series’ most improved driver, with an average finish of 4.4 this season.

Santa Cruz’ Logan Mitchell hits his home track at Ocean Speedway on Friday night, driving the no. 96x Mayer Iron and Design Boss Chassis. Mitchell is a multi-time winner in dirt clone karts and traveled to Arizona for pavement kart racing during the break along with getting in some training on iRacing.

Car owner Kevin Felkins has a busy weekend coming up with his daughter getting married. Leading his charge of drivers during the doubleheader will be Upper Lake’s Brody Petrie, who has five starts this year with a pair of second place finishes and a win at the series’ last stop on May 14th at Petaluma.

Friday’s action at Ocean Speedway in Watsonville will be joined by the NARC 410 Sprint Cars for the Pombo/Sargent Classic. Pit gates open at 2pm while grandstand gates open at 4:30pm. Hot laps are at 5:45pm with heat races to follow. Racing will be streamed live on FloRacing.com

Teams who travel from more than 240 miles to compete at either event will be eligible for a part of the $400 in road warrior money offered at each round this season.

Car construction details are available at www.WesternMidgetRacing.com or find the series on Facebook!