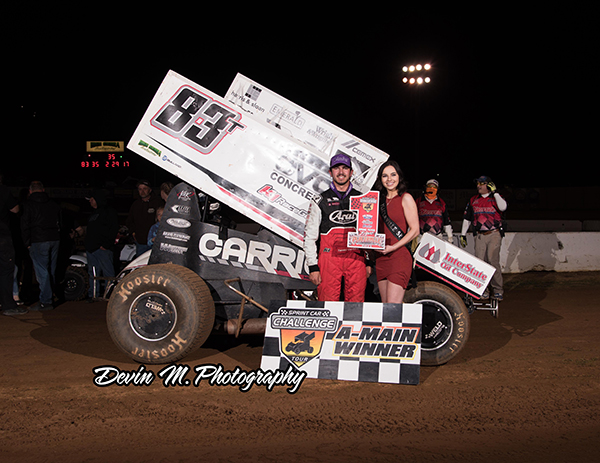 (March 28, 2021 from Gary Thomas) – During the most recent Sprint Car Challenge Tour opener in 2019, Lincoln’s Tanner Carrick jumped out to a large lead in the feature, only to have things end after getting over the edge of the track in turn one. Photo by Devin Mayo

Fast forward two years later and the talented 19-year-old found a little salvation on Saturday night, by claiming the $3,000 top prize at Placerville Speedway’s “Spring Fever Frenzy.” It marked Carrick’s second career victory at the quarter-mile, after earning his first just this past September.

“We always love coming to Placerville Speedway and to get a win with the Sprint Car Challenge Tour in front of these fans is pretty special,” Carrick commented. “It took a lot of patience to run that feature. It seemed like every time we would get in a groove there would be a yellow or red. I just focused on hitting my marks, especially in those closing laps and luckily we ended up here on the front stretch. I have to thank everybody that supports this race team.”

In the opening stages of the main event it was Carrick and Roseville’s Sean Becker running closely together up front, before the first red flag waved on lap eight for Michael Ing. The 35-lapper was plagued by slowdowns that didn’t allow drivers much time in lapped traffic. Early on two-time Forni Classic winner Justyn Cox was a show in himself running the ragged edge of the bullring as he made his way forward.

The Clarksburg driver jumped to second and then challenged Carrick for the lead, until things got a little too close for comfort in turn three between the pair. It resulted in Cox sitting idle in the turn to bring out the caution and suffer heartbreak after looking like one of the competitors to beat. After this the best action of the race occurred as Hollister’s Ryan Bernal carved his way up to second before going after the leader, until getting over the edge and then dropping spots on lap 24.

Carrick, Becker and Redding’s Chase Madjic then went at it in lapped traffic, much to the delight of the solid crowd on hand. That all came to a stop though when Bernal got off the corner again to bring out a yellow. A red flag on the restart for several drivers then created an open red and following that it was all Carrick, who drove off to take the Ron Stahl checkered flag over Becker and Madjic, who earned his best career Sprint Car Challenge Tour finish. Colfax racer Willie Croft had a strong run in fourth with Mather’s Kalib Henry rounding out the top-five.

Jodie Robinson had a fine run and was the Hard Charger in the main event after transferring out of the semi. The 18-year-old carved her way from 22nd all the way up to sixth at the finish. Completing the top-10 were Cox, who rebounded nicely, Bubba Decaires, 23rd starter Tristin Guardino and Colby Copeland. RC Smith earned the extra $100 from D&D Roofing for being the final finisher.

Full results are available at https://speedhive.mylaps.com/Events/1844316?fbclid=IwAR2iu2RGJyMn-HLxfNSrTzH6KLgI_nUrTzAIl3zQ8BJTdw343kG_fDFTGiI

The companion BCRA Lightning Sprint feature was all about Palmdale, CA driver Eric Greco Jr., who had his way with things out front to earn the victory over Craig Holsted, Dakota Albright, Greg Dennett and Harlee Aguilera. Heat race wins went to Hunter Kinney and Albright.

More information on the Sprint Car Challenge Tour presented by Elk Grove Ford and Abreu Vineyards can be found at our official website www.sprintcarchallengetour.com – Be sure to also like us on Facebook https://www.facebook.com/sprintcarchallengetour and follow on Twitter https://twitter.com/360SCCT for the latest breaking news regarding SCCT.