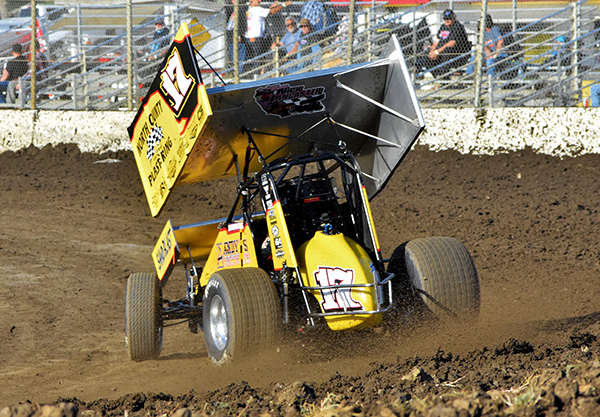 WATSONVILLE, CALIF. (May 22, 2021) – Justin Sanders continued his red-hot start to the 2021 season in the Ocean Sprints presented by Taco Bravo, driving to a three second advantage for his fifth win of the season on Friday. Sanders led all 30-laps of the eighth round of the 360 Sprint Car Series, extending his points lead at the Ocean Speedway in Watsonville, Calif.  Photo by Joe Shivak

Sanders led time trials, won his heat race, and claimed the dash to earn the pole for the feature. Concord’s Joey Ancona fell backwards at the start after starting third, before spinning in turn four for a caution. On the restart, Sanders leapt ahead of Bud Kaeding before the red flag flew for Jason Chisum of Salinas flipping in turn three.

Sanders and Kaeding led the way through the next restart before Chowchilla’s Eric Humphries and 2019 USAC West Coast 360 champion Tristan Guardino of Fremont both stopped in turn three. Forsberg retired to the pits under the caution while Guardino pitted for repairs.

A three-wide battle for second ensued on the restart, with McCarl attempting to go up the middle of Day and Kaeding. The hole closed, with McCarl and Day making contact. McCarl was tagged head on by J.J. Ringo then collected by both Nick Ringo and Jerry Bonnema. The flurry of hits sent McCarl up on his side on the backstretch. The fracas ended the night for Nick Ringo but all others involved rejoined the event.

Ancona made a big comeback through the field, advancing into fourth on the restart. Kaeding did a 360-degree spin in turn two on lap 15 but the caution fell to drop Kaeding from second to the tail of the lead lap. Ancona made another big maneuver when he slid past J.J. Ringo for second on lap 16.

Sanders built up a sizeable lead of over four seconds which was cut in half when he bicycled and went over the cushion in turn three. He rejoined and continued building up his lead in lapped traffic. Sanders claimed win number five on the year at Ocean Speedway over Ancona and J.J. Ringo. Brothers of Kyler and Koen Shaw drove from the eighth row to finish fourth and fifth.

Dennis Simunovich of Hollister topped a season-best 19 IMCA Sport Mods for the 20-lap victory. Kelly Campanile of San Ramon went outside Max Baggett to lead lap one. Baggett’s car went straight up the track in turn one on the second lap, washing into Campanile to bounce them from the front of the field. Simunovich snuck by to take the lead. A multi-car skirmish in turn one brought out a caution on the next lap.

Adriane Frost of Watsonville moved from eighth to second by the third lap of the race while Brentwood’s Fred Ryland drove eleventh to third by lap six. Ryland went around Frost for second and then tried high and low to pass Simunovich. Simunovich held on for the win over Ryland, Frost, Billy Robertson, and Randy Miller.

San Jose’s Rob Gallaher won his third Hobby Stock feature of the year in the 20-lap main event. Santa Cruz driver Terry Campion used the outside to take the lead and then encountered lapped traffic by lap seven.

Campion made contact with the lapped car of Bobby Gallaher, cutting down the left front tire for the leader. Although Campion was able to change the tire and rejoin the field, the incident handed the top position to Rob Gallaher. Gallaher never relinquished it, leading Wally Kennedy, points leader Joe Gallaher, Norm Ayers, and Jerry Skelton at the finish.

DJ Keldsen of Newman led the final 14-laps of the Four Banger feature for his first win of the season. Watsonville’s Richard Mitchell, Tony Gullo, Nicole Beardsley, and Kate Beardsley rounded out the top-five finishers.