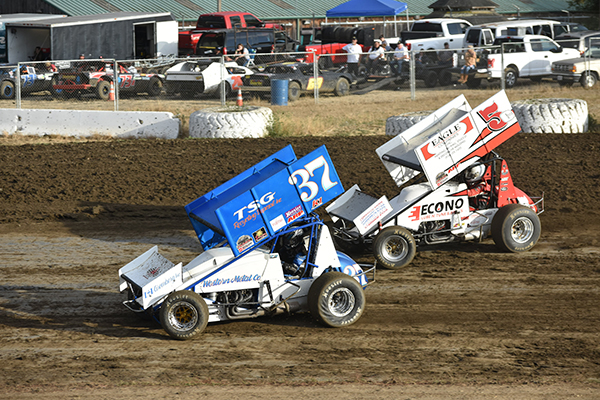 The series, which will feature Fujitsu General as the title sponsor, is backloaded to the second half of the year in hopes of escaping the COVID-19 pandemic, which has crippled grass roots racing operations in the Golden State. Only a handful racing events are scheduled during the first six months of the year.

The centerpiece of the King of the West campaign promises to be the “Fastest Five Days in Motorsports.” The five-race blitz kicks off at Placerville Speedway on Wednesday, August 25th and continues on to Merced Speedway, Ocean Speedway (Watsonville), the Stockton Dirt Track and Petaluma Speedway on consecutive nights.

“We are anxious to get back to business,” states series GM Jim Allen. “We only had four events in 2020 and everybody is hoping for a return to normalcy in the very near future. We feel we have a solid racing schedule on tap which will prompt race fans to get re-engaged with dirt track racing as we recover from this pandemic.”

The month of May will feature the lucrative $11,000 to win Peter Murphy Classic at the Tulare Thunderbowl Raceway on May 15th. A week later, the traveling series will invade Petaluma for the first of three races at the “Salute to First Responders” which will pay tribute to all of the local heroes that have battled wildfires in the wine country.
June will feature the first of a trio of “two-race” weekends with a short track doubleheader at a pair of action-packed quarter mile ovals. Ocean Speedway will host the 33rd Annual Pombo-Sargent Classic on June 11th, followed by the 30th Dave Bradway Jr. Race at Placerville Speedway on the 12th. This marks a venue change for the Bradway event, which had a solid foundation at Silver Dollar Speedway in Chico throughout its existence. Chico is not on the 2021 NARC-KWS schedule.

Ocean Speedway will be showcasing the ever popular Howard Kaeding Classic on July 17th.

Santa Maria Raceway features a pair of spots on the new calendar. The first “Winged-Madness” event will take place on July 24th and will include a fan favorite Wheelie Contest. The September 25th winged madness edition will also dish up a pit crew competition.

Calistoga Speedway will finally be back in action after being sidelined by fairgrounds lease negotiations and the coronavirus for what will be two-years. The last event held at the facility took place in September 2019. On September 4-5th, the historic half-mile oval is scheduled to host the Louie Vermeil Classic, featuring both the winged King of the West 410’s and the USAC-CRA non-wing machines. There is a possibility that the track will try to schedule additional events later in the year.

October promises to be a lucrative month, headlined by the $30,000+ Morrie Williams Legends Tribute, which features a pair of twin-20 main events. The first main will be lined up straight-up by qualifying times and the second completely inverted based on the finish of the first. The month will also include the eye-opening $21,000 to win Tom Tarlton Classic on October 29th, which is expected to draw some of the best driving talent from around the country. The Dirt Track at Kern County Raceway Park will host its only event on the schedule on Saturday, October 30th.

Hanford, CA driver DJ Netto is the defending 2019 NARC King of the West Fujitsu Sprint Car Series champion. A champion was not crowned in 2020 due to the overall lack of events.

Schedules can be downloaded and additional information can be found at NARC410.com. For more information, call 714-397-7417.

A separate announcement on series sponsors and the championship point fund will be released in the weeks to come.

Schedule subject to change without notice.