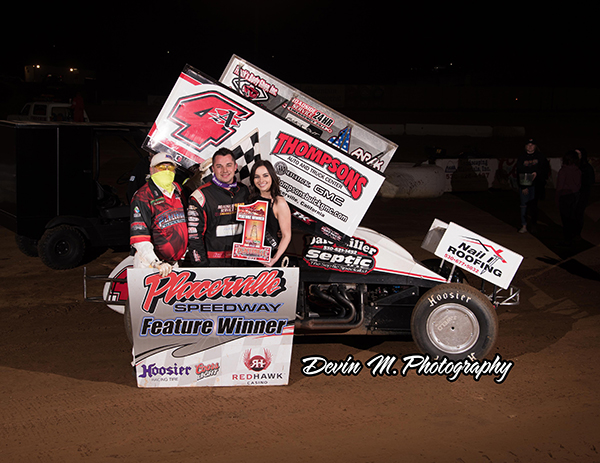 (April 11, 2021 from Gary Thomas) – When you are hot, you’re hot and Justin Sanders has started 2021 like a blazing inferno. The Aromas, California competitor continued his torrid pace in the early season on Saturday, becoming the first driver to reach three career wins in the annual “Tribute to Al Hinds” at Placerville Speedway. Photo by Devin Mayo

Sharing victory lane with Sanders during the entertaining night of racing were Ray Trimble with the Ltd. Late Models, Nick Baldwin with the Pure Stocks and Ryan Winter with the Nor-Cal Dwarf Car Association. With fans in the stands again it created an electrifying atmosphere to honor the former Promoter of Placerville Speedway, Al Hinds.

The 25-lap Thompson’s Family of Dealerships Winged 360 feature got off to a rough start when Tracy’s Kyle Offill was squeezed into the hill off turn two. The result was Offill going for a nasty tumble, but luckily he emerged from the car okay. When going green on the next attempt things were fast and furious on the quarter-mile bullring with slide jobs aplenty.

Roseville’s Colby Copeland set the early pace with Sanders, Lincoln’s Tanner Carrick and host of others in pursuit. A long green flag run allowed drivers to navigate their way through lapped traffic and Copeland did a fabulous job early until Sanders began to close in on the VSR No. 5V machine. The pair proceeded to put on a delightful duel for the lead, exchanging the top-spot multiple times before Sanders assumed the position with just a handful of laps remaining.

A late caution gave Sanders an open track and after that he kicked it into overdrive, pulling away from the field to accept the Ron Stahl checkered flag aboard the potent Thompson’s Auto/ Dale Miller Septic No. 4SA Sprinter. It marked his 15th career Thompson’s Winged Sprint Car triumph at Placerville, moving him into a tie for 11th all-time with past track champions Billy Wallace and Colby Wiesz. T. Carrick and Copeland gave the fans a show over the closing laps, which saw Carrick come home second and Copeland in third.

Auburn’s Andy Forsberg and Foresthill’s Ryan Robinson diced it up in exciting fashion towards the end as well, before finishing fourth and fifth respectively. Blake Carrick, Justyn Cox, Chase Johnson, Joel Myers Jr. and Chase Majdic rounded out the top-10. The nights B-main went to Joel Myers Jr., with the four 10-lap heats claimed by Blake Carrick, Ryan Robinson, Shane Hopkins and Colby Copeland. Tanner Carrick opened the night by earning the ADCO Driveline and Custom Exhaust Fast Time Award by clocking a 10.796 around the quarter-mile. A total of 33 Winged Sprinters competed at the second point race of 2021.

The 20-lap Pure Stock feature made for some of the most thrilling action during the night. Sacramento’s Jason Palmer started from the front row and jumped to the lead with Orville Owens and Nick Baldwin in hot pursuit. A wide and multiple-groove surface gave the Pure Stock drivers a chance to showcase their skills as they raced high, low and in the middle of the El Dorado County Fairgrounds bullring.

As the main event wound down it became a dogfight up front between the top-three competitors, which included Dan Jinkerson after Owens hopped the cushion off turn two. Baldwin looked to find a way by Palmer on several occasions and when the white flag waved, he made his move. As the crowd came to their feet Palmer, Baldwin and Jinkerson battled it out to the finish. Palmer got a bit wide off the final corner, which allowed Baldwin and Jinkerson to sneak underneath.

At the finish line it was Oakley, California’s Baldwin winning by inches over Jinkerson as Palmer went flying through the infield after coming home third. Kevin Jinkerson and Owens rounded out the top-five.

Following some slowdowns early on the Nor-Cal Dwarf Car Association put on a solid main event at the Hinds. Placerville’s own Mike Reeder took command on the start before Mike “Spanky” Grenert came after him running the high scary side of the speedway. Grenert charged to the lead and set the pace until Ryan Winter challenged him on lap nine. The pair raced closely together battling for the point until a red flag waved with 12-laps down. On the restart Winter carved his way to the lead and held the top-spot to the checkered.

Ben Wiesz had an eventful main event and ended up coming back to second after being involved in an early caution. Grenert, Nick Velasquez and Corey Eaton rounded out the top-five. Completing the top-10 were Dylan Shrum, Reeder, Kevin “Hollywood” Bender, Dan Geil and Jeremy Blackshere. Nick Velasquez won the B-main with the four heat races going to Shawn Whitney, Dylan Shrum, Mike Grenert and Tommy Velasquez III. The Dwarf Cars had another outstanding showing with 27-cars on hand for their first Placerville appearance of 2021.

The Ltd. Late Model main event was all about 2019 track champion Ray Trimble as he thoroughly dominated the 20-lap contest. Starting from the pole in the feature the Auburn driver pulled away with ease to capture his 16th career triumph at the Placerville Speedway. Dan Jinkerson crossed the stripe in second, followed by Tom Tilford, Tyler Lightfoot and Jay Norton in the top-five. Heat race wins during the night were picked up by Dan Jinkerson and Matt Davis.

Full results from the Tribute to Al Hinds can be found at https://speedhive.mylaps.com/Events/1847286?fbclid=IwAR3rfI70GgWbFVYDAnBb1bmZ-alLxK-qnKgpAInnxSrhXbAREAK2O7JxVG4

Racing returns to the Placerville Speedway next Saturday April 17th with another four division show on tap.