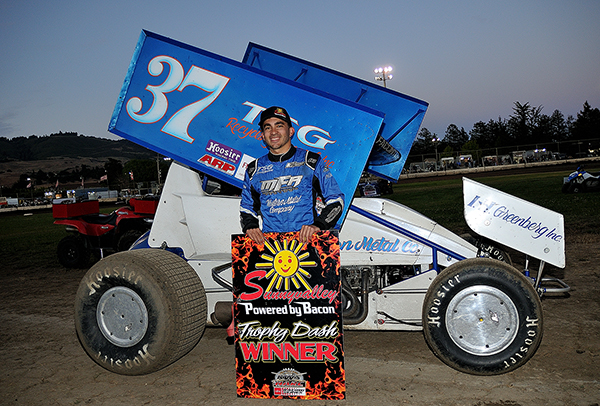 “The top was just so good and I knew the start was just going to be so important. Once we got out in clean air we were fast enough to maintain,” Faccinto said. “We didn’t make too many changes all night. Tried not to screw it up and it paid off.”

Lincoln’s Tanner Carrick won the hole shot into turn one but it was nullified when Atwater’s Sean Watts slowed with a left rear flat tire. Faccinto seized the lead on the next start attempt and reeled in lapped traffic by lap six.

Traffic bottled up the top four cars, with a three-wide battle for second exiting turn two. 2019 King of the West DJ Netto bounced off the left rear of Carrick, flipping wildly for a red flag on lap nine. Merced winner and 2021 Ocean Sprints championship runner-up Justin Sanders got hooked with British Columbian Robbie Price, requiring an extended red flag on the restart. The delay allowed Netto time to make repairs and rejoin the race.

Lapped traffic again reared its head and allowed fast-time qualifier and new King of the West track record holder Ryan Robinson to challenge Faccinto. Faccinto and Robinson went back-and-forth through turn four to complete lap 24 and again into turn one on lap 25. Contact allowed points leader Dominic Scelzi to dive inside to try to pass both.

Faccinto charged ahead over the final six laps for the $4,000 victory. Robinson, Scelzi, 2021 Ocean Sprints champion Bud Kaeding, and Fremont’s Shane Golobic rounded out the top-five.

Jim Pettit II ended the IMCA Modified championship season with an exciting win while Cody Burke won his third championship in the last four seasons. Fred Lind led the way while the leaders lined up on the top behind him. A caution fell on lap 18 for Raymond Keldsen, Jr. stopping in turn one. Pettit lined up outside row two on the restart. JC Elrod took the lead from Lind and Pettit followed Elrod into second. On the final lap, Pettit made an exciting move on the outside of Elrod exiting turn two to take the popular victory. Burke finished third ahead of Lind and Steve Pemberton.

Richard Ragsdale of Merced dominated the IMCA Sport Modified 20-lap feature for his first-career Ocean Speedway win while San Jose’s Randy Miller closed out a championship season. Ragsdale took the lead on lap one after starting fourth. He surrendered the lead to Max Baggett of Prunedale on lap nine. A restart on lap 11 allowed Ragsdale to retake the lead for the victory. Baggett, Mike Kofnovec, Jr., Kelly Campanille of San Ramon, and Markus Frazier of Santa Maria rounded out the top-five Miller finished the feature in seventh.

Ragsdale’s brother Chad Ragsdale accumulated a half-lap lead on the way to the 20-lap Hobby Stock feature. Joe Gallaher won a race long battle with Norm Ayers of Corralitos for second place, good enough to finish off a championship season. Ryan Muller and Jerry Skelton rounded out the top-five.

Tommy Velasquez III of Camarillo won the South Bay Dwarf Car feature and the championship. He fended off numerous challenges from Terre Rothweiler of Santa Cruz as they dipped in and out of lapped traffic for much of the race. Brandon Wiley of Santa Maria snookered Rothweiler for second at the checkered flag. Nick Velasquez finished fourth with Punky Pires rounding out the top-five.

Ocean Speedway wraps up its 2021 season with the Pettit Shootout on September 24 and 25 with IMCA Modifieds, IMCA Sport Modifieds, and Hobby Stocks competing both nights. Tickets available online at www.OceanSpeedway.com or at the gate.