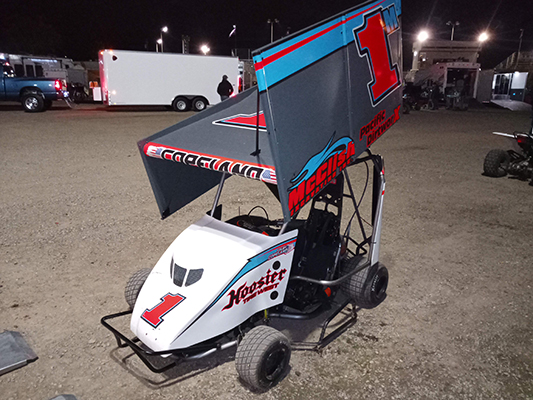 STOCKTON, CALIFORNIA (February 14, 2021) – Outlaw Kart and Kart racing returned to Stockton’s Delta Speedway on Sunday evening with Roseville’s Colby Copeland earning the victory in the 20-lap Open 500 Outlaw feature. The Open race was the nightcap of the seven division Stockton Challenge, the first appearance of the machines in three years. Nearly 100 teams competed on the 1/7th mile dirt oval at the San Joaquin County Fairgrounds in a partnership with the Chowchilla Barn Burner.  RACE RESULTS

Copeland paced the 23 Kart field in time trials with a blistering 9.556 second lap in the McClish Motorsports entry. Atwater’s Evan Burrola won the second heat race which earned him the pole position for the feature. Copeland started fifth but immediately pounced into the second position by lap five. The leaders began darting in and out of lapped traffic by the eighth lap of competition. Burrola earned a reprieve when Australian-born Danny Carroll and IMCA Modified racer Jesse Burks tangled in turn four.

Action slowed again on the restart with a pair of multi-car skirmishes in turn four including Rio Linda’s Koa Crane helicopter spinning and landing on his side. Burrola retired under the red flag while Carroll and Burks were out with their second cautions each. A restart on lap 14 saw Luke Hayes of Dunnigan drop steadily through the field, leaving Copeland and 2020 Delta Speedway Non-Wing and Super 600 Micro Sprint champion Caden Sarale well out in front. Copeland drove ahead to a 1.119 second victory over Sarale, Tyler Henson, Josh Wooten, and Isaiah Vasquez.

Oakdale’s Frank Correia won the 20-lap Clone feature with a bump-and-run for the lead on lap 16 down the backstretch. Jason Van Fossen of Tracy led the first two laps before a red flag for a tangle involving Rylee Schlessinger riding on top of Jesika Ayala in turn four. Van Fossen dropped out of the event under red for not having a Raceceiver radio.

Fourth starting Adam Murray of Sonora assumed the top position before the caution flew again on lap seven. Watsonville’s Rickey Sanders seized the lead on the restart while Adam Carter charged from 14th into the fourth position. Correia, the fast time qualifier, hounded the back of Sanders before the decisive bump for the lead. Correia led Murray, Sanders, Carter, and Jason Figura across the line.

Reedley’s Blaine Walls led all 20-laps for the Box Stock win. Walls jumped ahead from the pole position. Fast-time qualifier John Brumley of Lemoore advanced from fourth to second with a quick start as well. The top four cars were in a close formation by lap 11, with lapped traffic looming large on the following circuit. Bentley Nelson snatched third from Brumley on lap 13 in turn three in traffic. On the next go around, lapped car Ava Ingram came down from the top of the track on the backstretch into Brumley to end his race. Walls, Nelson, Carson City’s Levi Annas, Oakdale’s Hayden Stepps, and Alani Hickison of Sacramento were the top-five at the finish.

The 250 Outlaw Kart division had a lengthy feature event after two grinding crashes. Box Stock winner Walls suffered a hard crash into the turn four retaining wall that necessitated a lengthy stop to remove the driver safely. On lap ten, Michael Green of Chowchilla had trouble in the same corner while contending for the lead. Chowchilla’s Kennzzie Brown led the final five circuits that were trouble-free, leading Kylie Wilkinson of Bakersfield, Joey Stuessy of Penn Valley, and Los Banos’ Toni Sophia as the only remaining cars.

Beginner Box Stock made its first appearance at Delta Speedway in several years into a good one, with a fast-paced battle among 22 entries. The feature field was narrowed to ten starters after a pair of exciting 10-lap B-Mains. Tyce Dominigos of Tulare started third in the 15-lap finale but dove inside in turn one on lap one to rocket into the top position. Domingos never relinquished the lead as he led Logan Barnes of Oroville, Bryce Nelson, Blake Scovel, and Zayne Darpli at the finish.

Stock Appearing featured a back-and-forth family feud for the win with Jason Van Fossen coming out on top. Rich Van Fossen went around the outside at the start to take the lead. By lap seven, the Van Fossens began a torrid battle with numerous crossover moves. Jason took over on lap ten before a caution for Rich spinning on lap 11 in turn four. Ken Flynn nabbed the lead briefly on lap 12 during the restart before Jason Van Fossen retook the lead on lap 13. Bradley Dillard finished third with Jeff Wey as the final finisher.

Logan Mitchell led all 20-laps for the Pure Stock checkered flag. 2019-20 Chowchilla Barn Burner points runner-up Allisyn Furtado ran in lockstep with Hanford’s Mitchell for the entire feature but was unable to make a move for the win. Tracy’s Jake Smith, Oakdale’s Eli Rutherford, and Steve Alongi of Oakdale made up the top-five.