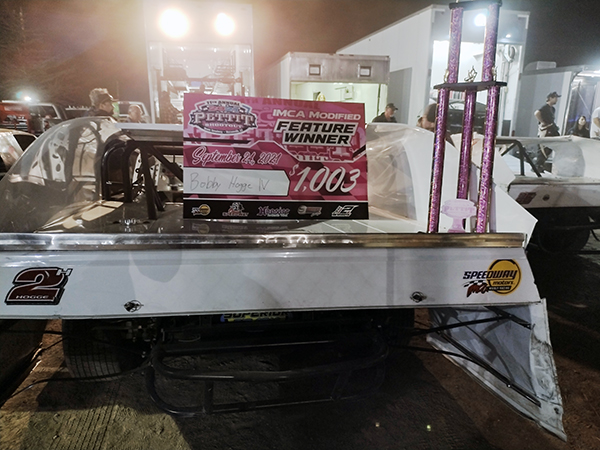 WATSONVILLE, CALIF. (September 25, 2021) – 2020 Pettit Shootout champion Bobby Hogge IV of Salinas started off the 2021 edition with a bang, taking the $1003-to-win Friday night victory at the eleventh running of the IMCA Modified classic at Ocean Speedway in Watsonville. Hogge’s win in the 33-lapper was one of three winners on the night with over 100 cars competing.

Side-by-side battling at the start of the feature ended with Prunedale’s Tim Balding leading lap one. Fast-time qualifier Paul Stone of Winton drove up to second by lap six. Three-wide action for fifth developed including Hogge and 2021 Ocean Speedway champion Cody Burke. Tenth-starting Hogge emerged in fifth by lap nine. A caution flew for 21st starting Rick Diaz and Oakley’s Troy Foulger tangling in turn two. Diaz returned after replacing a flat left rear tire. Hogge charged up the inside to enter a two-by-two battle for the lead. Stone took over the lead from Balding on lap 13.

Hogge took over third on lap 14 then was up to second by lap 15. 14th starting Jim Pettit II was also on the move, advancing to sixth by lap 17. Hogge looked inside of Stone for the point, then went outside, clearing him on lap 20 for the top position. They entered lapped traffic just one lap later. 2017 Ocean Speedway champion Nick Decarlo spun from third for a caution on lap 21, then had contact again on the restart with JC Elrod to end Decarlo’s night prematurely.

Pettit mounted a charge to pass Balding on the outside for third. Hogge grabbed the victory over Stone, Pettit, Balding, and Foulger. Decarlo was declared the Hard Luck driver while Hard Charger honors went to Rick Diaz who finished ninth.

Kanke used the outside to drive in to second place then started showing his nose inside of Spainhoward. Kanke tried the inside on at least three occasions in lapped traffic, finally passing Spainhoward on lap 13. Spainhoward fought back on the top to lead laps 14 and 15. The side-by-side action concluded with Kanke taking over on lap 16. Kanke topped Spainhoward, seven-time Ocean Speedway 2021 winner Fred Ryland of Brentwood, 2021 Ocean champion Randy Miller of San Jose, and Oakley’s Andrew Pearce. Hard Luck honors went to Andrew Peckham of Grass Valley while Keller came back to finish seventh to earn the Hard Charger.

Galt’s Les Friend used the inside line to move into second position in only his second race in his new Hobby Stock. Nelson won by 2.936 seconds over Friend. DJ Keldsen won a race-long battle with Terry Campion for third with Joe Willoughby finishing fifth. Dos Palos’ Ryan Hart won the Hard Charger with an eighth place finish from 19th on the grid, while Long was deemed the Hard Luck driver.

The 11th Pettit Shootout concludes Saturday night at Ocean Speedway including the 53-lap, $3003-to-win IMCA Modified feature plus action for the IMCA Sport Modifieds and Hobby Stocks. Drivers meeting is set for 2:45 with a complete night of IMCA Modified qualifying, heat races, B-Mains, and features to follow. Tickets are available at the gate with more details at www.OceanSpeedway.com