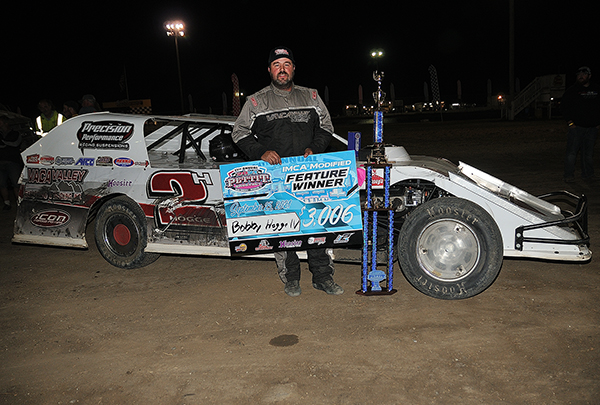 “You know hats off to the Pettit Family. I always get emotional when I talk about them because they’re long-time friends,” Hogge said. “That was just amazing right there. It was like everything was in slow motion. The car could run top, middle, bottom. Everybody in this field were stellar racers. Hats off to the race track and Tom Sagmiller, this thing was awesome tonight.”

Hogge lined up on the outside pole for the feature with 2021 West Coast Stock Car Hall of Famer Jim Pettit II behind him on the outside of the second row. Hogge spent little time driving to the front, taking the lead from pole sitter Ryan Porter of Atwater at the green flag. Hogge accumulated a 5.2 second advantage by just the eighth lap of competition, while Pettit and Porter staged a great battle for second. Pettit worked the inside for second while behind him, 2018 Pettit Shootout winner Nick DeCarlo of Martinez tried to drive inside Sacramento’s Josh Combs for fourth.

Hogge entered lapped traffic by lap 12 and DeCarlo pulled into the infield on lap 13 for an early end to his night. The side-by-side action continued for second until Pettit finally made the pass on lap 24. Combs passed Porter for third on lap 25 before Friday night hard charger Rick Diaz moved in to take fourth on lap 30 as well. Five-time Antioch champion Troy Foulger of Oakley took over fifth from Porter using the outside line on lap 31. The final 20-laps were highlighted by battling for the sixth position between 14th starting Robby Sawyer of Bakersfield, 2021 Ocean Speedway champion Cody Burke, Porter, and others. Hogge ran up onto tenth place running Paul Stone of Winton but spent over a dozen laps racing with him before putting him a lap down.

Car 33 of Cale Kanke swept the weekend in the IMCA Sport Modifieds by taking Saturday’s 33-lap, $1006-to-win feature. Chuck Weir had the early advantage with company from seven-time 2021 Ocean Speedway winner Fred Ryland of Brentwood. Kanke lined up on the outside line with Weir while Ryland tried the inside. Kanke used a slidejob in turn three to take the lead on lap ten. Weir tried to crossover Kanke into turn one but Kanke held the position.

Ryland tucked in on the top behind Kanke by lap 15 while Todd Gomez passed Weir for third on lap 18. Kanke led Ryland, Gomez, Tracy’s KC Keller, and Kenny Shrader at the finish for the victory and the sweep of the weekend.

Perhaps the most thrilling race of the weekend was the 33-lap Hobby Stock event, where Billy Nelson of Watsonville won in honor of his grandparents with last lap theatrics. Brek Smith of Newman led lap one from the outside pole position before fourth starting Ryan Hart of Dos Palos used the inside to lead lap two. Hart fought off a challenge from Watsonville’s Mitch Lettunich to lead lap six.

Terry Campion advanced from eleventh to fourth by lap 13 with Nelson overcoming a 16th starting position to run fifth by lap 14. Smith flipped on the backstretch battling with Campion for third, bringing out the red flag on lap 14. Smith was uninjured but eliminated from the race.

Nelson used the outside to take over third on the restart, then started to look inside at the top-two. Sam Kennedy began to challenge Hart for the lead, taking the position on lap 24 with a move on the inside in turn three. Hart eventually was shuffled back to fourth in the battling while Nelson went up the middle in a three-wide move to take second.

A caution on lap 30 set up a three-lap shootout. Kennedy, Nelson, and Campion lined up on the top line around the speedway. Coming to the finish, Nelson dove to the inside of Kennedy. He nipped Kennedy at the stripe by mere inches – officially .007 seconds – for the $506 victory. Kennedy, Campion, DJ Keldsen, and Hart rounded out the top-five finishers. Nelson earned the Hard Charger while Smith was credited with the Hard Luck award for his tumble.

The 11th Pettit Shootout concludes the 2021 season for Ocean Speedway in Watsonville, Calif. A Championship Awards Banquet is being planned with information coming soon!