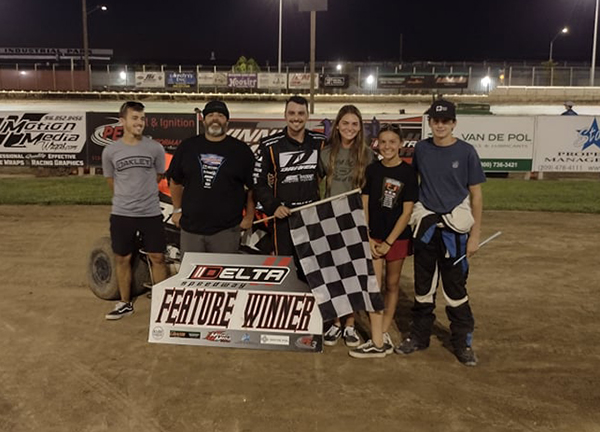 STOCKTON, CALIFORNIA (July 10, 2021) – Tj Smith of Fresno and Easton’s Caeden Steele each earned their second $500 wins of the Micro Sprint season at Delta Speedway on Saturday night, with Smith taking Non-Wing while Steele took the 30-lap Super 600 nightcap. Their wins were part of a fast-paced points race at the 1/7th mile presented by Financial Center Credit Union.

Springville’s Cameron Paul led the way at the beginning of the Non-Wing feature before a caution fell on lap five for Ashton Torgerson of Medford, Oregon in turn two. Paul led Tj Smith into lapped traffic by lap 15 with Smith hounding the rear bumper of Paul by lap 20. The leaders worked the top line behind the lapped car of Mariah Ede before Ede, the fast-time qualifier, tagged the turn three wall for a lap 22 caution.

Third place running Caden Sarale of Stockton lost his right rear tire and went into the third turn wall for a caution on lap 24. On the restart, Paul bounced through three and four then slowed with an apparent engine failure. Smith assumed the lead for the lap 25 restart and never relinquished it. Austin Torgerson finished second followed by Bakersfield’s Broedy Graham, Auburn’s Cody Gray, and Ashton Torgerson. Brandon Riveira and Ashton Torgerson split heat races over the 16-car field.

The 21-car Super 600 contingent earned its first repeat winner of the 2021 season with Easton’s Caeden Steele pacing all 30-laps of the feature. Steele went around the outside to lead lap one with Jake Hagopian of Fresno maintaining close pursuit through lapped traffic.

Raio Salmon suffered an engine failure and fire that dropped her from the fifth position, requiring a red flag when she came to a stop in turn two on lap 19. Steele pulled ahead on the restart to lead the final 11 laps of competition followed by Hagopian, Caden Sarale, Logan Trevino of Madera, and Tj Smith. Mariah Ede led time trials while Hagopian, Nikko Panella, and Colton Huelsmann won the three heat races.

Taylor Mayhew of Bakersfield won his third Restricted main event of the year worth $300, earning his fifth podium of the season as well. Mayhew raced side-by-side with Kyle Fernandez of Tracy on the opening laps before Mayhew took hold of the lead on lap two.

The lone caution of the race fell on lap 21 for an errant yellow when Mayhew briefly drove through the infield. He never spun or stopped and was allowed by officials to keep his position in the lead. Mayhew topped Lucas Johnson of Antioch, Fresno’s Colton Key, Visalia’s Jett Barnes, and Andrew Smith of Castro Valley at the conclusion of the 25-lap feature. 2020 Jr. Sprint champion Lucas Mauldin of Rancho Murieta led qualifying while Smith and Isabel Barnes won the two heat races.

Brody Rubio of Manteca extended his Jr. Sprints points lead with his fifth $200 victory in the 20-lap affair. A multi-car incident slowed the racing into turn one at the start, ending the night prematurely for Maya Mauldin. When racing resumed, Rubio motored ahead while the best battling took place behind him.