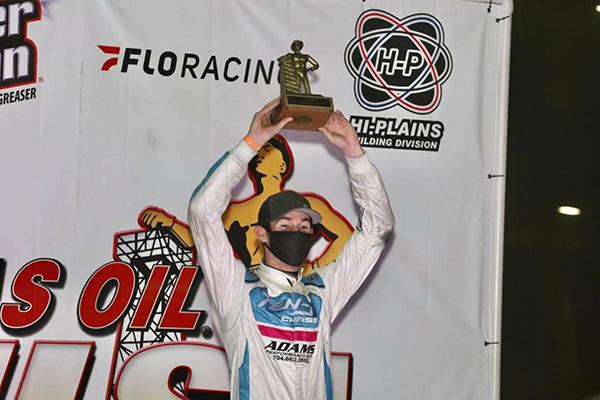 (January 3, 2021 from Bryan Hulbert) – Wrapping up the 36th edition of the Lucas Oil Tulsa Shootout with six first time winners, and one taking a second for good measure, one Golden Driller, drivers from Arizona, California, Illinois, Iowa, Oklahoma, and Pennsylvania each earned victories. Photo by Michael Fry

Three leaders in pursuit of the title of overall champion in the 55-lap Outlaw A-Feature, California’s Mitchel Moles led the final four laps to earn his first career Golden Driller. Rolling through the field from eighth, the California shoe moved to second on Lap 43 when he and Jonathan Beason split race-long leader, Joe B. Miller down the back straightaway following a single-file restart.

While Beason was able to win that battle for the lead, it was not meant to be, as that same restart saw Beason advance position on Joe B. Miller prior to the cone. Caution on Lap 51 for debris in the second turn, the penalty was assessed with Beason docked two positions. Advancing Moles to the point, the No. 13j was untouchable to the checkered flag, despite the loss of power steering. Jonathan Beason got back to second with Tyler Courtney roaring to third from 16th. Cody Key crossed fourth with Joe B. Miller ending up fifth.

Taking two wins in one of the best performances of the weekend, Pennsylvania’s Brian Carber topped Stock Non-Wing and A-Class while nearly adding a third win in Non-Wing Outlaw but having to settle for second with that race proving to be an underdog story of the weekend with Oklahoma’s Kris Carroll denying Carber a third win.

A last-minute decision to be in Oklahoma, the underdog theme continued for Mason Keefer who dominated the 600cc Modifieds. His first win atop Tulsa Expo Raceway clay, Keefer’s Golden Driller is the first to travel to Arizona since 2001 when Brandon Young topped Stock Light Karts.

Keeping pace on the field from the start, Jaxton Wiggs took his first win in Restricted A-Class. Stalked by California’s Austin Wood the entire race, the pair played bumper tag a few times, but the Illinois driver stayed unphased.

Barely taking the checkered flag before the caution was called for, Lucas Mauldin just held off the hard-charging Garret Benson to become the third driver in as many years from California to earn a Golden Driller in Junior Sprint competition.

The 37th edition of the Tulsa Shootout takes place December 29, 2021, through January 2, 2022, at the Tulsa Expo Raceway, located inside the River Spirit Expo Center in Tulsa, Okla. More information on the event will be posted soon.

The Lucas Oil Tulsa Shootout takes place at the Tulsa Expo Raceway, located inside the River Spirit Expo Center in Tulsa, Okla. All official rules, event information, and dates are online at http://www.tulsashootout.com. Fans can also follow the Tulsa Shootout at https://www.facebook.com/TulsaShootout and on Twitter (@TulsaShootout).