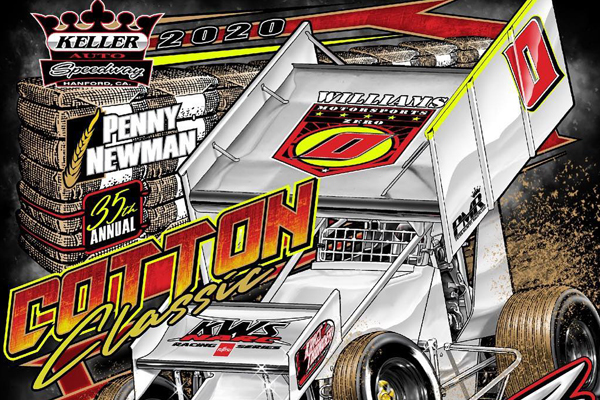 (October 6, 2020 by Jim Allen) – The high powered 410 sprint cars of the NARC King of the West Fujitsu Racing Series will be back in action on Saturday, October 10th when it invades Keller Auto Speedway in Hanford for the inaugural Morrie Williams Legends Tribute race. The event honors the late great legendary car owner who claimed four series championships with the sanctioning body.

This marks only the third scheduled event of the NARC season. As with previous event, the racing facility will continue to follow state-mandated COVID-19 protocols, which means the main grandstands will be closed to spectators. However, fans are allowed in the pit area as long as they wear a mask and practice proper social distancing. The event will be available on PPV at Floracing.com.

The event will be very unique in that it will feature two 20-lap main events in honor of Morrie Williams, a car owner who loved to watch cars charge from the back of the field. The first event (see format below) will be lined up straight up by qualifying times for cars that transferred through their heat races. The starting line-up for the second 20-lapper will line up completely inverted based on the finish of the first race (with the exception of any lapped cars.) That means the top finishers will be charging from the back.

There will be a 10-minute intermission between the two events when crews can make adjustments to their car race cars – except change tires. Any car that changes a tire would have to go to the very back of the field (behind lapped cars).

More than $27,000 in prize money is up for grabs including $2800 for each winner. The overall points champion will pocket an additional $1000.

“It’s an personal honor to present this race for the great Morrie Williams,” said Peter Murphy, the promoter of the track, and former longtime driver with the man. “He was the perfect mate to drive for and earned legend status in my book. It will be a great night of racing.”

Williams passed away last year after battling cancer, but his legacy continues to live on today.

Some of the other notable drivers who have driven for Williams over the years include Jonathan Allard; Canadian Jimmy Carr; Greg DeCaires; Dennis Moore Jr., Bud Kaeding (2018 championship); and four-time series titlist Kyle Hirst. Both Kaeding and Hirst will be competing in the event.

Allard, who won three championships with Williams (2006, 2008 & 2012), feels that this race is a perfect addition to the NARC racing schedule. “Morrie was an amazing car owner and I feel so fortunate to have been a part of an amazing team. The championships came due to Morrie’s ability to believe in all of us. He was always able to get the best out of his team.”

“He was different that most car owners,” continued Allard. “He was patient and allowed (crew chief) Ashley Smith and I to work in whatever direction we needed with the belief we would achieve many race wins and our championships. I have many amazing memories of Morrie because he taught me so much. The one thing about Morrie that I think about every day is how he treated people. Everyone that has met him has walked away a friend.”

There will also be a full racing program on Friday night (October 9th) with a Kings of Thunder 410 sprint car show.

The NARC King of the West portion of the program will consist of individual qualifying, three 8-lap heat races, a four-lap trophy dash, and a pair of 20-lap main events.
Also on the racing card are the King of Thunder 360’s and the Legends of Kearney Bowl.