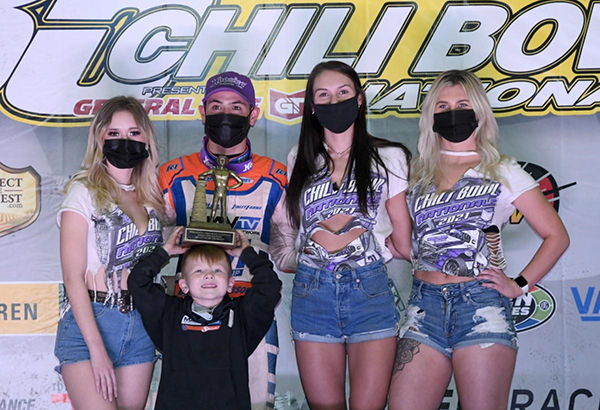 (January 17, 2021 from Bryan Hulbert) – It took 13-years for Kyle Larson to win the Lucas Oil Chili Bowl Nationals presented by General Tire, but it only took one to add a second Golden Driller to his trophy case as the California shoe led start to finish in Saturday’s 55-lap championship event.

Not without challenge, Larson had to fend off the charge of Justin Grant numerous times and Christopher Bell in the closing laps.

“To get two of these feels awesome,” said Larson as his son, Owen, hand-delivered the Golden Driller. “It was a different race than last year, but just thankful to get the chance to even come race here. I think a lot of us thought maybe we wouldn’t get to come run the Chili Bowl with the pandemic going on, so hats off to Emmett Hahn and everyone else with this event. It’s the greatest event in the world, and very lucky to be a part of it.”

Stalked by Grant through the opening laps, the NOS Energy Drink No. 2j took a look a few times. Diamonding off the fourth turn on Lap 15 with a run, caution lights greeted the field as Kyle Cummins slowed with a flat tire. Pulling away from Grant on the restart, the MAVTV No. 01 found traffic on Lap 26. Putting a trio of slower cars between himself and Grant, the No. 2j was about to have his hands full as Christopher Bell rolled up just as the caution waved again.

Rolling back to green with 37 laps to run, Larson put time on the field.

Taking second from Justin on Lap 46, Christopher Bell closed rapidly. On the back bumper of Larson with five laps to go, Bell turned under Larson off the fourth turn after Kyle biked the car on the cushion. Keeping the iRacing No. 84x to his rear, the field went back single-file when Blake Hahn spun on Lap 51.

Full assault on Larson on the restart, Bell began looking for a hole, but it was not to be as the cushion bit in turn three and sent Christopher flipping violently into the fence. Bell was uninjured.

Advancing Grant back to second, Justin took a shot at Larson on the restart but was unable to clear and instead slammed the cushion. Forcing the field to hit the brakes, Tyler Courtney ended up getting crossed up and going over.

Justin Grant crossed second with Tanner Thorson moving up eight spots to third. Cannon McIntosh was fourth with Owasso’s Daryn Pittman coming in as the night’s Hard Charger with a run from 20th to fifth.

Chris Windom moved from 14th to sixth with Ricky Stenhouse, Jr. seventh. Up 11 spots, Brad Sweet made it to eighth. Spencer Bayston made up six positions to ninth, with Logan Seavey wheeling 17th to tenth.

A total of 309 drivers were on hand for the 35th annual Lucas Oil Chili Bowl Nationals presented by General Tire. Saturday’s run of events included 25 Feature events starting with the double M-Features. The Pole Dash added four rounds to the overall Saturday event count. The night’s overall Hard Charger was Jason McDougal, who advanced position 54 times through six rounds (I-Feature through the D-Feature) of the Alphabet Soup.

The 2021 Chili Bowl Rookie of the Year was Oklahoma’s Daison Pursley with a 10th place finish in the first Dave.com B-Feature. The World Wide Technology Raceway Flip Count made it to 69. All drivers were ok.