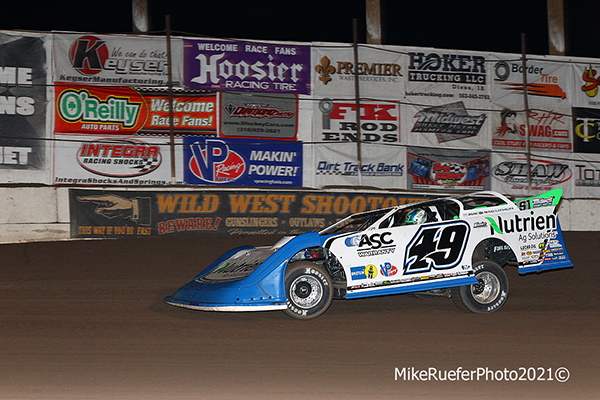 (January 18, 2021 by Aaron Clay) – Five nights of racing over the last eight days all came down to Sunday’s finale for the 15th annual Keyser Manufacturing Wild West Shootout presented by O’Reilly Auto Parts. The term “domination” is often overused in motorsports, but there is no better way to describe the action that took place on Sunday night.

For the second time this week, Ricky Thornton Jr. of Chandler, Ariz., paced the field in group qualifying after blasting around FK Rod Ends Arizona Speedway in 15.088 seconds. In doing so, Thornton Jr. was awarded the $100 SportTruck RV Fast Time Award presented by Screven Motor Speedway. Also, Thornton Jr. became the first Super Late Model driver to earn more than one fast time award this week, after staking claim to that honor on Wednesday, as well. In fact, Thornton Jr. set the overall quickest lap time in qualifying, throughout the six race miniseries, when he sped around the track in 14.535 seconds on Wednesday. That honor paid an additional $1,000, courtesy of the Premier Waste Services Shock the Clock program.

With 49 Dirt Track Bank Super Late Models presented by Black Diamond Race Cars entered for the finale, Keyser Manufacturing Wild West Shootout officials decided to schedule only four heat races on Sunday, rather than hosting six heat races as they had the entire week, up until now. Jonathan Davenport of Blairsville, Ga., Brian Shirley of Chatham, Ill., Ricky Thornton Jr. and Jimmy Mars of Menomonie, Wis., each earned heat race victories on Sunday, which also meant they would participate in the Schaeffer Oil redraw, later in the evening. Even more impressive for Davenport and Thornton Jr., they each won all six heat races that they competed in, throughout the entire Keyser Manufacturing Wild West Shootout presented by O’Reilly Auto Parts.

Much like previous nights, the Schaeffer Oil redraw took place in front of the main grandstands of FK Rod Ends Arizona Speedway and was broadcasted live on Flo Racing. Brian Shirley drew the “number one” Schaeffer Oil can, earning him the $100 Gorsuch Performance Solutions Pole award, along with the coveted inside front row starting position for Sunday night’s 50-lap, $25,000-to-win main event. Unfortunately for Shirley, Jonathan Davenport started to his outside and had his eyes set on a $10,000 bonus being offered by Keyser Manufacturing.

The Shaw Trucking 50 took a few restarts to get going, as the Midwest Sheet Metal caution flag flew on lap one, then again on lap three, both involving Chase Allen of Midlothian, Texas. Unfortunately for Allen, he was unable to continue after the second incident and was credited with finishing 23rd. Jonathan Davenport wasted no time, however, utilizing his outside front row starting position to power around the outside of Shirley on the first lap and quickly began to stretch his lead.

The third caution flag was displayed at the halfway mark, when Rodney Sanders of Happy, Texas slowed at the exit of turn two with significant right side damage. The incident offered a “reset” to what had been a fierce battle for the lead, prior to the Midwest Sheet Metal caution, as Ricky Thornton Jr. attempted to get underneath Davenport on lap 23. The two raced side-by-side off of turn two and split Donny Schatz of Fargo, N.D., down the back stretch, while lapping him, but Davenport was able to maintain the lead.

Few drivers could keep pace with Davenport on the restarts, but Tyler Erb of New Waverly, Texas, did everything in his power to make them exciting. Erb had worked his way from 11th to seventh, when the fourth caution flag was displayed on lap 28 for an incident involving Jimmy Mars and Donny Schatz. Mars was unable to continue and finished 16th. Erb took advantage of the next restart opportunity, charging from seventh to fourth on a daring dive-bomb into turn one. The next Midwest Sheet Metal caution flag flew shortly after Erb’s bold move, when Mike Marlar of Winfield, Tenn., and Jared Landers of Benton, Ark., tangled in turn one. That incident ended Marlar and Landers’ nights, relegating them to finish 17th and 18th, respectively.

Davenport continued to flex his muscle on the race’s final restart, quickly leading by nearly a straightaway over his closest competitors. However, the restart allowed Erb to make another bold move into turn one, as he successfully slid by Ricky Thornton Jr. and Brian Shirley, to claim second place. Thornton Jr. and Shirley battled for a few laps, with Ricky coming out on top and taking sole possession of third place. By the time Erb got settled into the runner-up position, he found himself over two seconds behind Davenport and continuing to lose time. At one point, Davenport led by over three seconds, with less than 10 laps remaining.

The final handful of laps saw Erb cut into Davenport’s lead, but he ran out of time and could not catch “Superman”. For the third time this year, Jonathan Davenport found himself parked in Hoker Trucking Victory Lane, this time $25,000 richer for his efforts. Davenport also earned the $10,000 Keyser Manufacturing bonus for claiming three feature wins this week, bringing his total winnings over $35,000 on Sunday. In total, Davenport earned nearly $50,000 on the entire week, after winning two other $5,000-to-win features, along with the $3,000 points fund, courtesy of Black Diamond Race Cars.

After winning the previous two nights, Tyler Erb settled for the runner-up position on Sunday, along with finishing second in the final point standings. Ricky Thornton Jr., Brian Shirley and Bobby Pierce of Oakwood, Ill., rounded out the top-5 finishers.

The Mesilla Valley Transport and Border Tire Modifieds presented by Arizona Differential saw “domination” from a driver of their own on Sunday, after Jake O’Neil of Tucson, Ariz., led all 25 laps. The race was slowed by five Midwest Sheet Metal caution flags, but each restart saw O’Neil resume his healthy lead.

The final caution flag dropped on lap 23, setting up a two-lap shootout to the finish. O’Neil remained unphased, sprinting to the checkered flag and collecting the $2,000 payday by 0.729 seconds over Tyler Peterson of Hickson, N.D. Clint Johnson of Neosho, Mo., Rodney Sanders of Happy, Texas and Brooks Strength of Raymond, Miss., completed the top-five finishers on Sunday.

The RHRswag.com X-Mods presented by Barnett Harley-Davidson had the most thrilling and unpredictable main event of the night on Sunday. Brennan Gave of Princeton, Minn., led the beginning of the 25-lap feature over Lance Schill of Langdon, N.D., with Brock Gronwold of Fergus Falls, Minn., in striking distance.

Everything changed when the race’s second Midwest Sheet Metal caution flag flew on lap 15, as it erased Gave’s healthy lead and setup a rash of cautions and restarts. Schill and Gronwold were both able to work their way around Gave on the ensuing restart and unfortunately for Gave, he and Preston Carr of Carrington, N.D., made contact at the exit of turn four on lap 17, causing Gave to pound the turn one wall. The damage ended Gave’s night and relegated him to finish 20th.

Schill now found himself leading over Carr, Andy Bryant of Fort Scott, Kan., Shane Sabraski of Rice, Minn., and Jason VandeKamp of Scandia, Minn. However, Schill’s time out front was short-lived, as Carr was able to work his way by him on lap 22. At the exact moment that Carr passed Schill, he got loose at the exit of turn four and nearly spun out. Having made an excellent save, Schill had a horrible angle for the entrance of turn one and completed a full 360-degree spin, collecting Bryant. Bryant was able to continue and finished 12th, but the incident ended Schill’s night, crediting him with 19th.

Sabraski wasted little time on the final restart, successfully passing Carr and cruising to win his second feature of the week, in the RHRswag.com X-Mod division presented by Barnett Harley-Davidson. Carr had a spin of his own before the checkered flag dropped and was credited with finishing 15th on Sunday, though that was plenty for him to clinch the 2021 X-Mod points championship. VandeKamp, Gronwold, Zach Brom of Winona, Minn., and Chris Hawkins of Neosho, Mo., completed the top-five finishers.