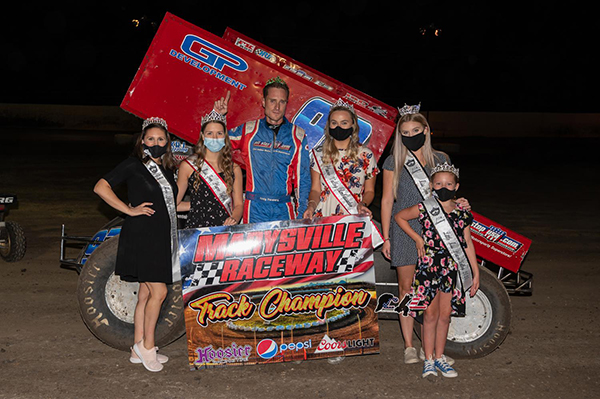 Ryan Robinson returned to victory lane during the fast and fierce 25-lap winged 360 sprint car main event. Robinson also captured the nights fastest lap in qualifying with a blistering 12.569. Robinson earned extra money for the award and when he came to receive his winnings, he also announced the third heat race for the sprints. Joining him on the mic was Kenny Wanderstadt, who also received money for his exciting qualifying lap wheelie.

The 25-lap main event started with Sean Becker and Shane Golobic on the front row. Unfortunately, Becker’s car bicycled up the track and his steering broke. As his car drifted around, Willie Croft had nowhere to go and crashed hard into Becker’s No. 35. Both drivers were uninjured but could not continue. Up front, Robinson was the leader. He was the fastest car on the track in clean air but once he caught some traffic, the track narrowed up and as usual in sprint car racing it allowed Golobic and the rest of the top five to close in. Racing vamped up until a lap 18 red was needed for Nick Larson.

On the restart, Golobic passed Robinson for the lead as the top and bottom of the racetrack was utilized by each driver. As Golobic drove around, Robinson diamonded back off the turn and drove back by. Behind them, Andy Forsberg had moved to third, but a hard charging Tanner Carrick passed him on lap 22. Carrick quickly closed in on the top two. The final lap was epic as all three drivers were in the mix for the win. As Robinson dove into turn three he had secured enough space between himself and the other two to get the win. Golobic was second and Carrick third. Forsberg finished fourth to capture the track title. Defending track champion Michael Ing was fifth. Alec Justeson went from 11th to sixth and won the extra money awarded to the sixth-place finisher.

Croft led all 12-laps to win the B main event. Billy Wallace finished second and Josh Wiesz was third. Final transfer to the main event was Kevin Lovell. A big turn out of 31 cars raced during the final night.

Phillip Shelby returned to his favorite spot at Marysville Raceway, victory lane. Shelby was dominant during the 20-lap race. In fact, at the end of the race he held over a four second lead. Brian Cooper charged from his ninth starting spot to finish second. The Merritt’s should be commended for fielding competitive cars all season long. Hunter, Mike, and Shaun have all added great racing this year. Hunter did a great job to finish third after leading at the start of the race. Mike Merritt came home in the fourth spot. Jimmy Ford finished fifth. Throughout the night, the championship battle revolved around Ford and Timothy Allerdings. While never had their best night, Allerdings finished sixth, one spot behind Ford and it was good enough to win the track title by just two-points.

Ben Wiesz led all 15-laps to get the popular win during the Dwarf Car feature. The race was originally scheduled to run 20-laps, but numerous cations elongated the event and shortened the laps. Chasing Wiesz for most of the race was Sean Cutucci but a lap 12 accident sidelined him. That moved up Carl Droivold who finished second. Dylan Shrum finished third. Wade Ehrlich was fourth. Travis Day rounded out the top five.