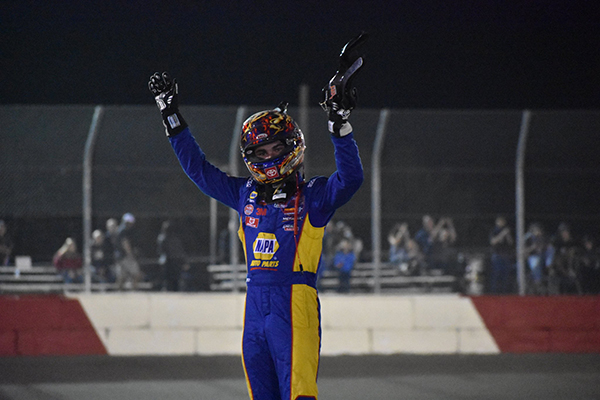 “This is unreal. To drive this car and start the year with no experience is a tall feat. I’d never thought I’d get here. It can’t be much sweeter,” Scelzi said.

Scelzi pounced on the 124th lap of the race, diving inside Gray for the lead coming to the white flag. After side-by-side contact on the front stretch, Gray spun with a flat left rear tire while Scelzi dashed ahead for the win. The victory came during the 22nd appearance for the West Series in Roseville and the first time under the ARCA banner.

Gray battled side-by-side on several restarts with Virginia’s Mason Diaz. The bottom proved to be the preferred line throughout the battle. The top-five contenders lined up nose-to-tail including eighth starting Gracie Trotter who had driven into the third position.

A debris caution slowed the action on lap 105. Diaz fell to third on the restart as he got loose on the outside line. The caution fell again for debris on lap 110.

A multi-car skirmish ensued on the following restart as the field raced into turn three. Trevor Huddleston got into the back of Diaz while Trotter tangled with Loomis’ Jack Wood.

All three local divisions who competed on Friday night completed their main events without a caution flag. A-All Mini Storage was part of a group of supporting sponsors for the events as seen on AllAmericanSpeedway.TV American Racer West, Jaws Gear & Axle, and McGinnis Race Car Bodies offered awards as well.

Roseville’s Roy Smith held off 2020 Super Stock champion Andrew Peeler of Sacramento for his first win of the season. Peeler was aiming for his sixth consecutive win and led the combined practice and qualifying session. A six-car invert placed Smith and Peeler on the third row for the 40-lap main.

Roseville’s Jeremy Fritts led the opening lap before former track champion Erick Ray – in his first start of the year – grabbed the lead. By lap 14, Ray, Peeler, and Smith were lined up as the top-three cars. Smith took over the lead with an inside pass on lap 17. Peeler quickly followed into second. Peeler stayed glued to Smith throughout the remaining 23 laps but was unable to complete a pass for the lead. Smith won the $300 feature plus the $100 hard charger award ahead of Peeler, Ray, Blake Disomma, and Andrew Kemp.

Sacramento’s Jason Philpot added to his championship resume with Friday’s Jaws Gear & Axle Limited Mod triumph. The win paid a total of $650 including the hard charger prize. Philpot was not the fast-time qualifier however, with Derrick Doering of Auburn taking that title. The duo quickly advanced from the third row up to the leader Mike Gorham of Lincoln. Doering overhauled Gorham on lap 22 when Gorham was hung up in lapped traffic on the outside line.

Philpot and Doering made contact into turn one on lap 33 but were able to separate with Doering maintaining the lead. Philpot went to the outside with two laps remaining, which led to a wheel banging and sliding duel exiting turn four. They made contact again into turn one but straightened out for the backstretch. Doering then spun, nearly collecting Gorham in a narrow miss. Philpot persevered for the win ahead of Gorham, Nuno, Doering, and Don Shalla.

Matthew Fuhs of Roseville ended his father Ray Molina’s streak of six straight F4 wins by taking the $150 to win, 30-lap main event. Fuhs also added a $100 hard charger for his efforts. His hard charger came by the way of a qualifying mishap, when both Fuhs and Molina went under the 16.5 second break out. They were relegated to starting tenth and eleventh in the starting lineup respectively.

John Sproule of Rocklin led the first two laps from the outside pole before 2020 championship runner-up Rich Innis took over on lap three. Fuhs was quickly up to second by the ninth lap, then grabbed the lead on lap 18. Molina and Innis had a great battle for second while Fuhs gained a comfortable lead. Fuhs won by 1.2 seconds over Molina, Innis, Jerry Nunes, and Vic Theberge.